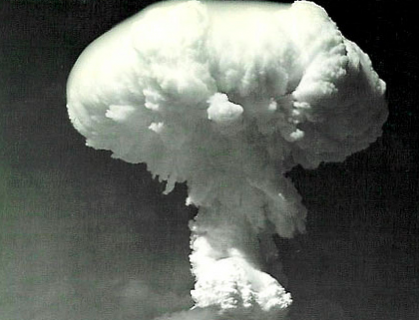 The day after Thanksgiving, when Americans were still digesting on La-Z-Boys and watching football, the State Department quietly announced that the 2012 conference for a Middle East zone free of nuclear weapons had been canceled by the United States. It doesn’t quite qualify as inconvenient news deliberately dropped over a holiday weekend (Israelis and Palestinians were probably watching the news, not sleeping off turkey), but it comes close.

The cancelation, apparently due to circumstances in the region, doesn’t reflect particularly well on President Obama, who had made nuclear non-proliferation a priority in his administration. In 2009, shortly after his inauguration, he appeared in Prague and presented an ambitious vision to achieve a world without weapons of mass destruction. Since then, he has worked toward that goal—holding nuclear summits in Washington and South Korea—but with mixed results. The summit in Seoul for example, dissolved into squabbles between the US and Russia, and did little to advance a nuclear weapons-free agenda. (The New York Times called it “a most undiplomatic pileup.”) Reports early this year indicated that Obama was considering reducing the US nuclear arsenal, but likely not until further talks with the Russians some time in 2013.

Although experts say putting this latest conference on hiatus doesn’t bode well for diplomacy in the Middle East, it doesn’t necessarily spell doom for Obama’s nuclear goals, either.

“I don’t think it’s a black mark, but it is a slight setback,” says James Lewis, a spokesman for the Center for Arms Control and Non-Proliferation. “Unfortunately, the way the world is going right now, there’s not an appetitite for this kind of long-reaching conference.”

Recent hostilities between Israel and Hamas were likely a factor in postponing the talks, in addition to instability across the region in the wake of the Arab Spring. According to a State Department statement, the conference was canned because of “present conditions in the Middle East and the fact that states have not reached agreement on acceptable conditions for a conference.”

“Clearly a weapons of mass destruction-free zone in the region cannot be negotiated in one meeting,” says Lewis. “And key players in the Middle East likely lack the political will to begin discussions right now, he concedes. “But a failure to move this process forward will only heighten the multiple security dilemmas that exist.”

Arab League chief Nabil Elaraby concurred. “[The postponement] will have a negative impact on regional security and the international system to prevent nuclear proliferation as a whole,” he told Reuters.

The conference was supposed to be held next month in Finland. It was planned as a follow-up to the final document of the 2010 Non-Proliferation Treaty Review Conference, where nearly 190 nations assembled at the United Nations headquarters in New York to develop an international treaty to prevent the spread of nuclear weapons. The idea was that all Middle East states would attend a nuclear conference, and the non-proliferation talks would be co-sponsored by the United States, Russia, the United Kingdom and the the UN Secretary General.

Henry Sokolski, who served from 1989 to 1993 as the Deputy for Nonproliferation Policy in the Office of the Secretary of Defense, says that such a discussion is long overdue. “I say that as someone who is not particularly optimistic that we’re all going to be joining hands. But you’ve got to start somewhere and it seems to me there’s plenty to talk about.”

A Reuters piece suggested that the United States is concerned that a conference could be used by Middle Eastern countries to “bash Israel.” Israel and the United States do not publicly acknowledge that Israel has nuclear weapons, although it’s widely believed that it has an arsenal. Arab states and Iran routinely blame Israel for thwarting nuclear disarmament in the region.

In its statement, the State Department said, “We would not support a conference in which any regional state would be subject to pressure or isolation.” Israel had not yet confirmed whether it would attend the conference when it was canceled.

The State Department has been trying to get the various countries to talk for a while. Lewis says he is optimistic that it will resume the negotiating effort when the timing is better—perhaps when hostilities between Israel and the Palestinians cool down, or when there is some progress on the issue of Iran’s nuclear program. “I’m confident we will see this as a White House and State Department priority later in the term… and in the next two years we’ll see it rescheduled,” he says.