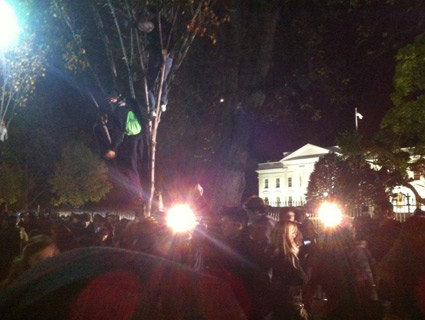 “I just got back from OHIO, and all I got was FOUR MORE YEARS,” screamed a stumbling but upbeat Obama campaigner.

Following across-the-board cable news projections that President Obama had won a second term, hundreds of supporters flooded the north side of the White House bordering Lafayette Square. There was a lot of whooping, jumping, and delighted liberals climbing trees. It was like the night Bin Laden got shot in the face, only with more partisanship and less bloodlust.

Obama supporters brought conga drums, life-size cardboard cut-outs of the Michelle, Barack, and Joe, and the standard placards and flags. Also, there was this doodle dog wearing an “OBAMA OR BUST!” white cape (according to smaller text on the dog-shawl, the animal was on a “cross-country tour”). 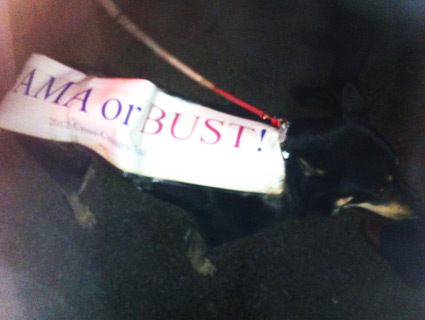 Peppered throughout the celebrating crowd were the usual dissenting voices looking to be passively heard. There was that huddle of college-age males repeatedly shouting, “Allahu Akbar!!!” and then grinning at their implied jab at BHO. There was that one guy sermozing about Reaganomics literally through a bullhorn. And then there was a pair of grey-suited conservatives—name-checking Castro, Iranian mullahs, the works— who really did sound like they believed America had just reelected our Mars-traveling, gay-orgy-having, hurricane-making, nose-job-getting leftist overlord.

You know, the expected trolling amidst the partyin’.

And there was, of course, the obligatory pro-Obama mosh-pit:

The Wall Street Journal also has some good footage of the crowd of hundreds (“most of them young”) at the White House on Election Night.