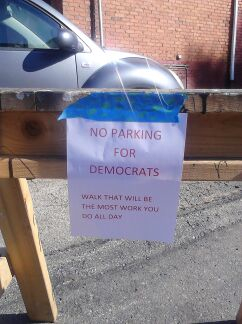 Early this afternoon in Charleroi, Pennsylvania, there were five signs in place aimed at stopping Democrats from parking near a polling station, according to Pennsylvania voters Erica Gust and Lori Marks. One read: “NO PARKING FOR DEMOCRATS – WALK THAT WILL BE THE MOST WORK YOU DO ALL DAY.” The signs were mounted on barricades—one directly in front of the polling place entrance. According to Gust, who snapped the enclosed photo with her smartphone, when she returned later in the afternoon, the sign directly in front of the entrance had been removed, but the four others remained. The polling place is on Van Vorrhis in Fallowfield Township, in southwest Pennsylvania. According to Marks, several drivers who pulled up to the polling place were following the directive on the signs, driving away and parking across the street at a nearby library instead.

It remains unclear who posted the signs.