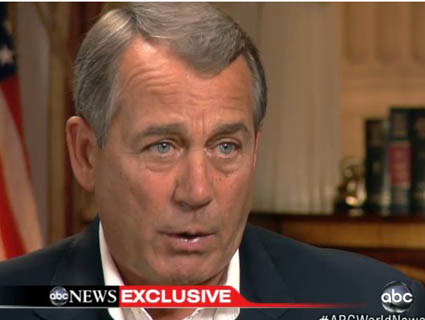 After watching Barack Obama get reelected with a whopping 75 percent of the Latino vote, including about half of the historically Republican-leaning Cuban-American vote in Florida, Republicans are beginning to warm to the idea of comprehensive immigration reform.

During Obama’s first term, Republicans successfully blocked attempts at comprehensive immigration reform and filibustered the DREAM Act. But during an interview with ABC News yesterday, House Speaker John Boehner (R-Ohio) said it was time to tackle the issue:

It’s an important issue that I think oughta be dealt with. There’s– this issue has been around far too long. And while– I’m– believe it’s important for us to secure our borders and to enforce our laws– I think a comprehensive approach is long overdue. And I’m confident– that– the president, myself, others– can find the common ground to take care of this issue once and for all.

Some leading conservative pundits have also come around on the issue. Sean Hannity said on his radio program Thursday that undocumented immigrants who are “law-abiding” should be able to have a “path to citizenship” as long as the feds “secure the border.” Charles Krauthammer stopped short of supporting citizenship, but said that some sort of “amnesty” had to be considered.

The backlash is already manifesting. Rep. Steve King (R-Iowa), who has referred to illegal immigration as a “slow-motion holocaust,” tweeted yesterday that “Obama voters chose dependency over Liberty. Now establishment R’s want citizenship for illegals. You can’t beat Santa Claus with amnesty.” Republicans foiled George W. Bush’s attempts at comprehensive immigration reform, and the party has only moved right on the issue since. Not do Republicans exactly have a spectacular record of compromise with the Obama administration.

Republicans who believe their problems with Latino voters can be completely resolved with a shift on immigration are probably mistaken. Immigration isn’t the only issue that Latinos care about, but Republican opposition to immigration reform is frequently expressed in terms that suggests blanket hostility to Latinos as a whole. Taking the issue off the table might help the GOP in that respect, but more importantly it would spur economic growth and provide a real solution for the roughly 11 million unauthorized immigrants living in the US, most of whom are working hard, taking care of their families, and minding their own business.