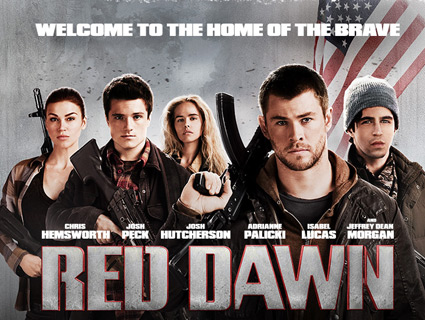 Paid For By The Committee For Good-Looking Young People Against Totalitarian Foreigners.Courtesy of FilmDistrict

Well, Hollywood has remade Red Dawn, and the foreign-policy wonk community is baffled.

The 1984 original (directed by John Milius) depicts the trials and triumphs of the Wolverines, an all-American teen guerilla squadron that defends Colorado against invading Soviet, Sandinista, and Cuban forces. (The film was so culturally influential in the United States that the 2003 operation to capture Saddam Hussein was named after it.) The 2012 version takes place in Spokane, Washington. Barack Obama is president, and the attack is happening on his watch. The remake updates the villains to North Korean troops—aided by Putin‘s Russia—who conquer large chunks of America with their warplanes, electromagnetic pulse machine, and use of anti-Wall Street propaganda.

The North Koreans. These guys. (It’s important to remember that the film is not satire, and that the last movie to portray the North Koreans as an existential threat to the US was Team America: World Police.)

It’s a conceptually hilarious invasion premise that’s somehow less plausible and less amusing than Nazis from the moon. (The new Red Dawn invaders were originally written as the infinitely more believable Chinese, but that was altered—in post-production!—so as to avoid endangering potential profits from the Chinese market.)

Here are three foreign policy experts who decided to humor me and weigh in on the remake (the Pentagon did not respond to a request for comment):

Lawrence Korb, former assistant secretary of defense to Ronald Reagan, and a senior fellow at the Center for American Progress:

What!? Really? How are the North Koreans gonna get here? We’re talking about thousands of miles. Did they stage an amphibious landing like we did in Normandy? Did they fly over? Each of the pilots in their air force only flies four hours each year! Their military is in terrible shape, they don’t have enough fuel, and they don’t have the artillery. Like, how exactly is this going to happen?

The premise is actually no more absurd than Independence Day, or the aliens in the new Battleship. So to pose the North Koreans as a credible threat to the continental United States is as ridiculous as the spectre of all-out alien invasion. Also, how exactly would they get from there to here??

Michael Mazza, research fellow at the American Enterprise Institute specializing in defense policy in the Asia-Pacific:

Uhhh…… Obviously the premise is entirely ridiculous. There have neither the money nor the military capacity to reach us. It’s fantastical. Yep. 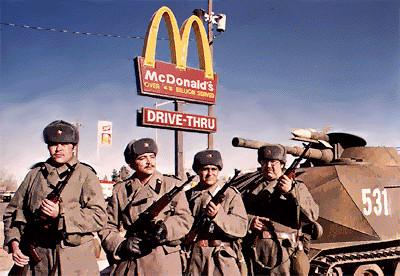 A still from the 1984 original that has more artistic value than any other photo I have ever seen. MGM/United ArtistsYes, the Red Dawn remake is an intentionally brainless big-budget action movie. But even in the realm of Hollywood make-believe, this still strains credulity and inspires heaving sighs. Here’s its slick and ridiculous trailer:

Red Dawn gets a wide release on Wednesday, November 21. The film is rated PG-13 for sequences of crushingly dumb but somewhat enjoyable escapism involving explosions and gunfire. Click here for local showtimes and tickets.