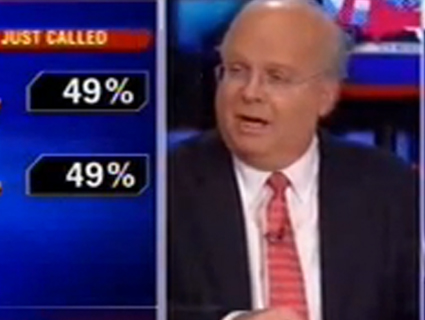 “I think this is premature,” Fox News contributor Karl Rove said last night on-air after the network called Ohio, and the election, for President Obama. The veteran GOP operative continued: “We gotta be careful about calling things when we have like 991 votes separating the two candidates and a quarter of the vote to count,” he said, in the face of unimpeachable electoral analysis showing that Ohio would go to the president.

The rant caused a palpable silence in the studio. Anchors Brett Baier and Megyn Kelly appeared rather stunned. “That’s… awkward,” said Kelly. Baier and Kelly decided to respond by having Kelly march out of the studio and down the hallway to Fox’s “decision desk” to get some clarity. Which she got, indeed. Watch the rather amazing spectacle below, in two parts: