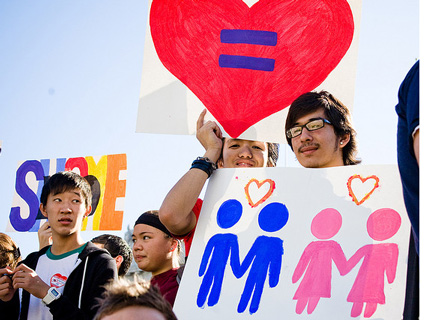 Until Tuesday night, the anti-gay rights movement had been undefeated at the ballot box, winning every single time same-sex marriage rights had been put to a popular vote. Thirty-two states had voted to restrict same-sex marriage, including deep blue California.

Then last night, for the first time ever, as my colleague Kate Sheppard noted last night, Americans voted to legalize same-sex marriage through statewide referendums in three states: Maine, Washington and Maryland, while defeating a proposed amendment to the Minnesota state constitution to ban same-sex marriage. After losing at the ballot box thirty-two times, last night supporters of marriage equality swept all four contests where those rights were put to a vote.

Anti-gay rights activists have worked for years to build up firewalls in the states against same-sex marriage, hoping to hold off the tide of historical inevitability. In several of theses contests, polls that showed support for marriage equality ahead would turn out to be painfully wrong when the votes were counted. Opponents of same-sex marriage read this as proof that in the privacy of the voting booth, their moral vision would prevail. The National Organization for Marriage saw their path to victory in peeling off socially conservative and religious minority voters who usually vote for Democrats and enlisting them in the fight against same-sex marriage rights. Internal documents showed that NOM believed that by putting forth black and Latino spokespeople, they could discredit the idea of same-sex marriage as a civil rights cause and drive a wedge between two typically Democratic constitutencies. In several states, legislatures passed laws legalizing same-sex marriage, but NOM’s frequent wins at the ballot box whenever same-sex marriage rights were put to a popular vote, they argued, proved that the arc of history did not necessarily bend towards marriage equality.

That changed Tuesday night, as voters went to the polls in three states and voted to grant same-sex couples the same rights as heterosexual ones. The results are harbingers of the future in several crucial ways: LGBT activists’ win in Maryland, which has a large population of black voters, suggests that NOM’s racist wedge strategy is crumbling. With the Supreme Court potentially taking cases challenging the constitutionality of bans on same-sex marriage in the near future, the Justices may see wins in Maryland, Washington (if the lead holds) and Maine as a sign that if they ruled in favor of same-sex marriage rights, they would not be seen as foisting a drastic cultural change on a country that is not prepared to recieve it. Instead, the Justices assumed to be on the fence, like Anthony Kennedy, could be more easily persuaded that this is a cause whose time has come.

Regardless of what the Supreme Court decides however, this is the beginning of the end for the anti-marriage equality movement. They long ago began to lose in the courts and state legislatures. Now they have begun losing at the polls. This battle may go on for years, but there is no longer any doubt about the outcome.