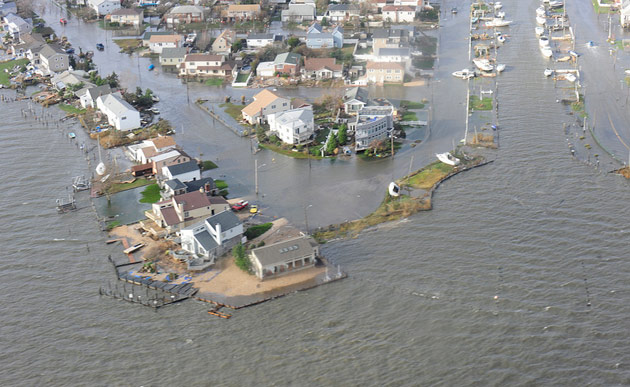 From a Coast Guard flyover of Long Island after Hurricane Sandy.<a href="http://www.flickr.com/photos/dvids/">DVIDSHUB</a>/Flickr

The catastrophic damage left by Hurricane Sandy has once again underscored the costly shortcomings of the way we—that is, federal taxpayers—insure property owners against the monster storms that are becoming ever more predictable as the planet warms and sea levels rise.

Storms, not terrorists, present the biggest threat to the coastal cities and communities that are home to more than half of all Americans—not to mention critical conduits for international trade. And yet the FEMA-administered federal flood insurance program, which took a bath after Hurricane Katrina six years ago, is still foundering. As the New York Times reported this morning:

The federal program collects about $3.5 billion in annual premiums. But in four of the past eight years, claims will have eclipsed premiums, most glaringly in 2005—the year of Hurricanes Katrina, Rita and Wilma—when claims totaled $17.7 billion. Private insurance companies have long avoided offering flood insurance to homeowners.

“It’s like rat poison to them,” said Tony Bullock, an insurance industry lobbyist, explaining how the risk outweighs the benefit for private insurers. “You need the federal backstop.”

While Sandy’s overall financial toll has yet to be tallied, Gov. Andrew Cuomo has estimated damages in New York state alone at $50 billion. No more than $20 billion of the overall cost will be covered by private insurance, says Cynthia McHale, director of the insurance program at Ceres, a sustainable-economy coalition consisting of companies, investors, and public-interest groups. This puts most of the remaining burden on state and federal governments.

Many states finance their own residual insurance programs; most of Florida’s coastal development, for example, is covered by its Property Insurance Corporation. And as private insurers keep dumping their “rat poison” coverage, the public initiatives take up the slack. In 1990, states were covering just $55 billion worth of assets. Today, it’s $760 billion. “They are underfunded,” McHale says. “They don’t have enough money in the bank to cover those losses.”

But it is the similarly underfunded federal flood insurance program that’s poised to take the biggest hit after Sandy. Bob Hunter, who administered the program during the 1970s, analyzed data last week for every coastal community from Delaware through Massachusetts affected by Sandy. According to his calculations, 200,000 homes were affected. Based on claims from previous storms, he estimates that the average claim will run about $50,000 for a total of $10 billion. (The program has perhaps $4 billion in its accounts.)

The federal flood insurance program, Hunter says, was designed “to retard construction near the coast and near edges of lakes and rivers.” But under FEMA, the maps used to assess risk and set premiums have become badly outdated. The result is below-market insurance rates that have permitted, if not encouraged, construction in flood zones. (It doesn’t help matters that many coastal communities have fought zoning changes that would make structures less vulnerable—but also less attractive.)

Earlier this year, Congress passed legislation mandating minor changes to the federal insurance program—FEMA is in the process of updating its flood-plain maps and will start including rising ocean levels in its premium calculations. But something more radical seems in order to deal with property owners who are flooded again and again only to rebuild in the same stricken locations. From the Times:

Perhaps the most troubling problem, program officials acknowledge, is that only a tiny share of enrolled properties accounts for a giant share of the overall claims, as the properties are repeatedly flooded and rebuilt in low coastal regions and in hurricane flight paths.

One Biloxi, Miss., property valued at $183,000 flooded 15 times over a decade, costing the program $1.47 million, according to federal data provided by the agency to a member of Congress. Another in Humble, Tex., has resulted in over $2 million in flood payouts even though it was worth just $116,000.

The flood insurance program has been steeped in politics at least since the early 1990s, when a move to discourage coastal overdevelopment was scuttled by then-Sen. Alfonse D’Amato (R-NY). Here’s how the Times reported it back in October 1992:

The Senator, a Long Island Republican…was one of six co-sponsors of a sweeping reform of the Federal Flood Insurance Program. But after he was pressed by a group of Fire Island residents, who own some of the most expensive beachfront homes on the East Coast, Mr. D’Amato became a major opponent of even a watered down version of the measure.

Environmentalists supporting the reform efforts say Mr. D’Amato’s abrupt change of heart is an extraordinary example of how special interests can kill legislation that would benefit the vast majority of Americans by reducing billions of dollars in Federal liabilities and protecting sensitive coastal areas from further damaging development…

Advocates of reform say the insurance, which is prohibitively expensive on the private market, has encouraged destructive and dangerous construction in environmentally sensitive and otherwise uninsurable areas like barrier islands, the shifting spits that jut up from the ocean, providing storm protection for much of the East and Gulf coasts. The insurance program has become, the critics say, a subsidy for some of the country’s richest homeowners.

But D’Amato won the day, and ever since, developers have continued to build in fragile, low-lying coastal zones. To this day, most the risk on these otherwise uninsurable properties is assumed by taxpayers.

An interesting side note: Last week, Fitch, the insurance rating agency, reported that the hardest hit private insurers were household names, including State Farm Mutual Group, Allstate Corporation, Travelers Group, Liberty Mutual Insurance Group, and the Chubb Corporation. These companies are themselves insured from climate-related losses, at least in part, by global re-insurance conglomerates like Swiss Re, Renaissance Re and Munich Re. And while American insurance executives have been reticent about attributing their coastal losses to climate change, the re-insurers have been outspoken. A sample from one company’s Twitter feed: