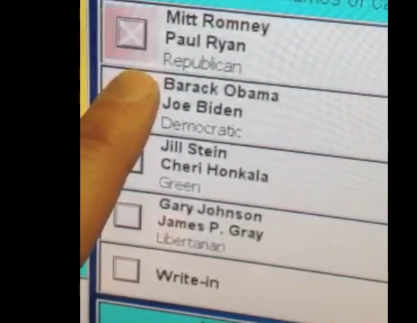 County officials have found another Romney-loving robot: A faulty electronic voting machine in Union County, Pennsylvania, has been recalibrated and put back online after it wouldn’t allow a vote for President Obama, Mother Jones has confirmed.

Earlier today, MJ reported on another incident this morning in Perry County, Pennsylvania, in which a voting computer’s touchscreen ballot converted all Obama votes into votes for Romney. The second machine came to light after a local college professor found he couldn’t cast his vote for Obama on it.

“I spoke with a poll worker there and saw her fold up the machine. I also called [a national wattchdog hotline] to report the incident,” said Andy Hirsch, director of media communications at Bucknell University, who posted a video of the machine’s malfunction on Vimeo after it failed to record his ballot choices.

John Showers, chairman of the board of elections for Union County, confirmed that there was a problem with the calibration of the machine; the problem has since been fixed, and the machine has been returned to service. He said: “In general, there’s a calibration issue with one machine in each election here, so we had this one, and it was taken care of,” he said.

Hirsch said he’d learned about that previous machine snafu in Perry County, just before he set out for his own polling station. “I watched that video right before I left, and wondered whether or not it was real,” he said. “Now I’m not surprised!”