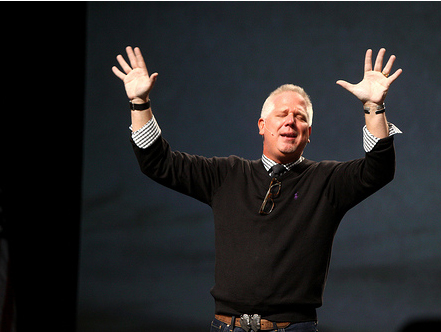 As my colleague Tim Murphy has previously reported, Glenn Beck has a new novel out about the right’s favorite environmental conspiracy. Agenda 21 is a fictionalized account of the socialist sustainable development plan that paranoid tea partiers believe a decades-old UN treaty is going to bring upon us.

The book promises to be less than enlightening, even though it turns out Beck didn’t even write it; he just bought the rights to a book that some woman had already written, and then turned it into “right-wing propaganda,” as the book’s editor described it in a Salon piece last month. Which is why this review of it from climate scientist Michael Mann over at Popular Science is rather amusing, as it attempts to seriously evaluate some of the book’s “science”:

And what about the book’s treatment of matters of science? I’m usually willing to suspend disbelief for the sake of a good fictional narrative. But the conceit that human beings might in some dystopian future be imprisoned as beasts of burden and raised and kept alive purely for the energy that can be harvested from them goes too far. Such a scenario problematically neglects the laws of thermodynamics. It makes little if any sense, after all, to employ a primary energy source (be it the incoming radiation from the Sun, the heat escaping from Earth’s core, or the energy released from the burning of fossil fuels) to manufacture proteins or raise crops, only to feed an army of macrofauna (i.e. human beings), only in turn to harness the energy they produce. If it is only energy that is being sought, such a chain of energy conversion processes is inefficient to the point of absurdity. The only sensible option would be to exploit the primary energy source itself.

I did my best to ignore the implausibility of this plot device when it first reared its head in The Matrix. But it is far less tolerable when used as a foundation for a misguided anti-environmental narrative. We are forced to accept, without explanation, how decades into the future no effort has been made to take advantage of far more plentiful and efficient renewable energy sources like wind and solar energy (which, by some estimates, could provide 70% of our energy needs in the U.S. in less than two decades). Not only have renewable energy technologies apparently not benefited from the increased efficiencies expected after decades of further research and development, they appear to have vanished altogether!