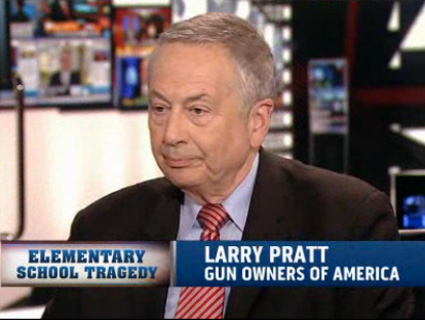 The Washington green room is usually a fun place where Democrats, Republicans, journalists, legislators, executive branch officials, policy advocates, and politicos of various bents—occasionally adversaries—await television hits and chitchat politely among one another. The discourse can yield intriguing gossip, interesting tidbits, and, most important for a journalist, productive leads. It’s a microcosm of official Washington. But on Monday, as I cooled my heels prior to appearing on Hardball, the green room at the DC studio for MSNBC was filled with tension. In one chair was Larry Pratt, the executive director of Gun Owners of America, a group that’s more die-hard on gun rights than the National Rifle Association. Standing next to him was David Chipman, of Mayors Against Illegal Guns, which was founded by New York City Mayor Michael Bloomberg. In essence, the nation’s emotionally fraught debate over guns was jammed into this tiny room.

Pratt and Chipman had never before debated previously on television. Pratt believes gun rights are completely unfettered, and there can be no restrictions on fire arms, period. (In years past, he has joined with white supremacists, anti-Semites, and right-wing militia leaders to denounce gun control advocates.) Chipman, a former agent for the Bureau of Alcohol, Tobacco, Firearms, and Explosives, advocates implementing a comprehensive gun safety program that would begin with extensive criminal and mental-health background checks for gun buyers. The green room often brings partisans of opposing sides into close proximity. But given the Newtown massacre—and I can’t speak for Pratt or Chipman—this moment felt archly awkward.

So I made small talk. I noted that the NRA had been suspiciously quiet in the past few days. With a sneer, Pratt said, “You’ve noticed that, too?” Well, I asked, should the NRA be out there right at this moment? “It’s an odd time to get laryngitis,” he said, a touch of defiance in his voice.

I suppose, I said, that the NRA’s duck-and-cover stance was good for Pratt and that he would gain attention that otherwise would go to the larger pro-gun outfit. “Exactly,” he said, with a smile.

Was he worried that the Newtown massacre would create political momentum for gun control measures? “Not yet,” he answered, adding that many Democratic lawmakers “surmised what Bill Clinton surmised in 1994,” referring to the GOP takeover of the House that was partly fueled by gun advocates ticked off by the passage of a partial ban on assault weapons. “But,” Pratt added, “if they’re feeling lucky, they might try something.”

At one point, I drew Chipman into the conversation. He noted that the first step his outfit advocated was enhanced background checks. Looking at Pratt, he said, certainly that’s something we can all agree on. Pratt wouldn’t yield an inch. “I’ll speak for myself,” he shot back.

Moments later, Pratt would appear on Hardball and call for arming teachers, principals, and school janitors, claiming, “It would serve you better than sitting like fish in a barrel.” He also would tell Chris Matthews that “we have guns in order to control the government.” When Matthews demanded an example, Pratt claimed that in 1946, citizens in Athens, Tennessee, took up arms against corrupt government officials.

In the green room, while Pratt, Chipman, and I watched the latest news from Newtown, I did wonder if the horrific tales and images of the past few days had caused Pratt to rethink his over-the-top advocacy of gun rights. Dead six-year-olds. A nation shocked. A community destroyed. All part of what sadly appears to be a never-ending series of such nightmares. Have you, I asked, reconsidered any of your gun-related views, even for a moment, since last Friday?

“You wouldn’t see me here if I had,” Pratt answered. “I keep waiting for the other side to see the logic of my position.”