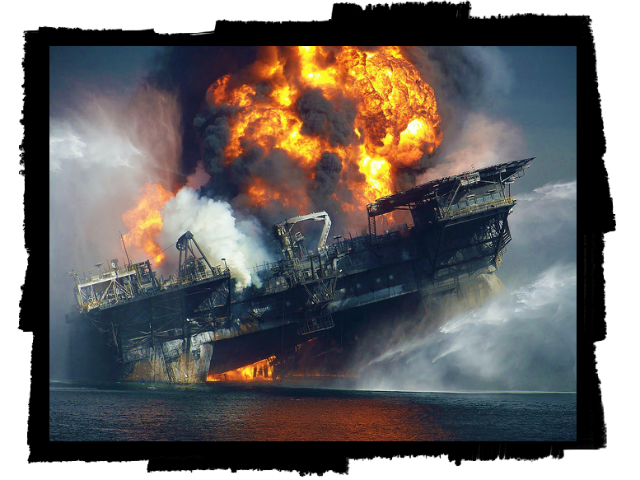 The science journal PNAS (Proceedings of the National Academy of Sciences) has published a Deepwater Horizon Oil Spill Special Feature taking a look back 20 months after the explosion that killed eleven people and upended countless lives along the Gulf Coast. Specifically at what happened, what we learned, and what could be done better the next time around. The introduction is authored by Jane Lubchenco, administrator of NOAA, and Marcia McNutt, director of the USGS, among others. They write about the unprecedented scientific and engineering challenges suddenly thrown down in an arena of chaos:*

[S]topping the flow of oil, estimating the amount of oil, capturing and recovering the oil, tracking and forecasting surface oil, protecting coastal and oceanic wildlife and habitat, managing fisheries, and protecting the safety of seafood. Disciplines involved included atmospheric, oceanographic, biogeochemical, ecological, health, biological, and chemical sciences, physics, geology, and mechanical and chemical engineering. Platforms ranged from satellites and planes to ships, buoys, gliders, and remotely operated vehicles to laboratories and computer simulations… Many valuable lessons were learned that should be applied to future events.

Here’s a quick look at the findings of a few of the other papers in the special feature. 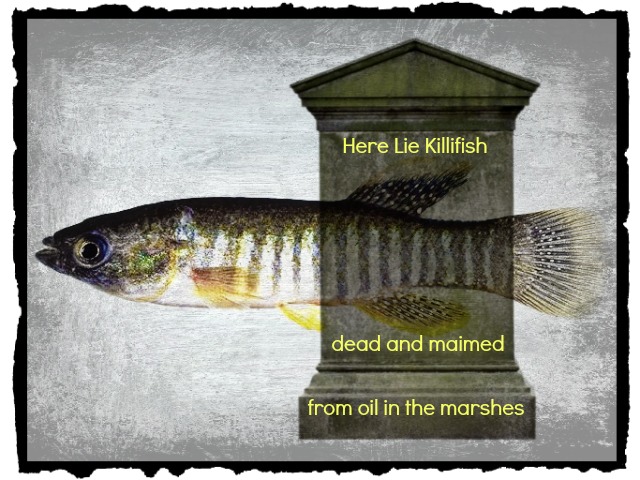 This paper begins by noting that the biological consequences of the Deepwater Horizon oil spill are unknown especially for plants and animals that live year-round in areas that were oiled. The authors studied killifish—small dwellers of the coastal marshes of the Gulf coast—during the first four months of the spill. They found that fish living in oiled areas showed significant biological changes including genetic changes. The embryos and larval forms of killifish exposed to contaminated waters showed genetic changes of the type that lead to developmental abnormalities, decreased hatching success, and decreased survival. Overall the levels of biological and genetic changes in Gulf killifish in oiled waters were similar to what was seen in fish, sea otters, and harlequin ducks who initially survived the Exxon Valdez oil spill in Alaska but who afterwards suffered population declines. 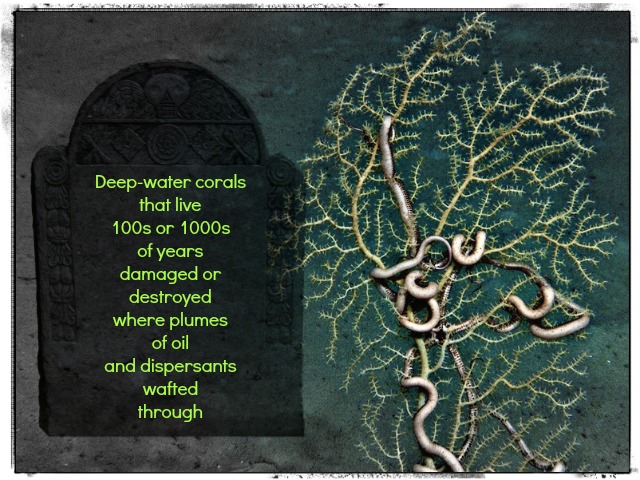 This paper assessed the impacts of the Deepwater Horizon oil spill on deep-water coral communities of the Gulf of Mexico. The authors examined 11 sites three to four months after the well was capped. They found healthy coral communities at all sites (map here) more than 12 miles / 20 kilometers from the Macondo well. But one site less than 7 miles / 11 kilometers away got walloped. The coral colonies there showed widespread signs of stress including: varying degrees of tissue loss; enlargement of sclerites (small bonelike supports); excess mucous production (think: snot); brittle stars (like the one wrapped around the coral sea fan in the photo above) that were bleached (think: stressed and unhealthy); and corals smothered with brown fluffy material called floc. Forty-three corals colonies were photographed at the contaminated site. About half of those colonies showed signs of stress in more than half the colony. A quarter of those colonies showed signs of stress in >90 percent of the colony. The brittle stars living commensally with the deep-water corals were hard hit too, with 53 percent displaying abnormal colors and/or attachment to the corals. Petroleum biomarkers in the floc bore the signature of oil from Deepwater Horizon. The authors write:

The presence of recently damaged and deceased corals beneath the path of a previously documented plume emanating from the Macondo well provides compelling evidence that the oil impacted deep-water ecosystems. Our findings underscore the unprecedented nature of the spill in terms of its magnitude, release at depth, and impact to deep-water ecosystems. 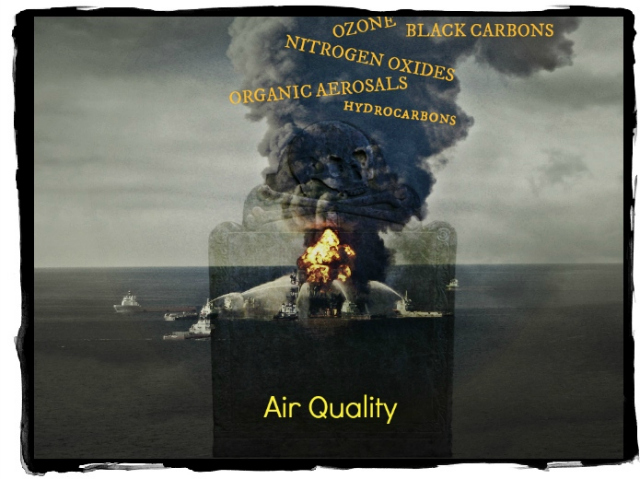 This paper reports on a wide range of gases and aerosols measured from aircraft around, downwind, and away from the Deepwater Horizon site, plus hydrocarbon measurements made from ships in the area. As you might guess air quality issues were different for workers at the site than for people living along the Gulf coast. Four sources of primary air pollutants attributable to the oil spill were detected including: hydrocarbons evaporating from the oil; smoke from deliberate burning of the oil slick; combustion products from the flaring of recovered natural gas; and ship emissions from the recovery and cleanup operations. Secondary organic aerosols that formed over the oil spill were dispersed in a wide plume which continued to increase in mass downwind, likely increasing aerosol particles in coastal communities. Hydrocarbons and ozone were also found downwind of the spill site though confined to narrower plumes. 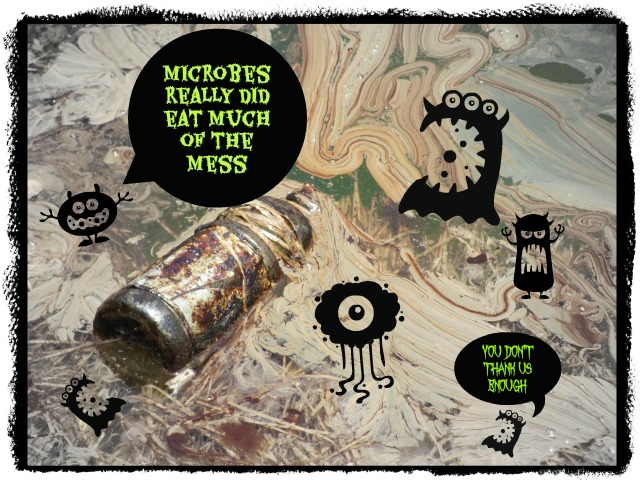 Photo and mashup: Julia Whitty
Other papers in the special issue deal with estimating the flow rate of the well after blowout, plus the decision to cap the well, federal seafood safety response, and a lot more. All the Deepwater Horizon papers in this PNAS issue are open access so you can read without a subscription.

This paper and this one looked at the effects of the microbial communities in reponse to the sudden eruption of oil and gas into the surface and deep waters of the Gulf. The blowout fed a deep sea bacterial bloom that ate hydrocarbons, formed a localized low-oxygen (hypoxic) zone, and altered the microbiology of the region. Blooms of microbes arose in the plumes of oiled and gassed water, plumes which then sometimes cycled on currents back to the spill site now ready populated with microbes ready to eat more erupting oil and gas. This made for an efficient natural compost system. Since crude oil is composed of thousands of different hydrocarbon compounds that biodegrade at different rates in different depths and water temperatures, the erupted plumes were colonized by different species of microbes at different stages, depths, and ages. (Thanks microbes!)