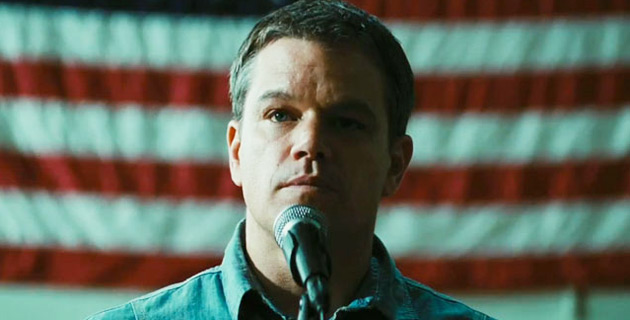 And a fine singer to boot.Courtesy of Focus Features

If Matt Damon & Co. really wanted to make a movie that would scare American audiences off of fracking for good, they should have just made a movie dramatizing fracking’s potential threat to America’s beer. Instead, what we get is a quaint love story wrapped in a conspiracy movie, draped in a toothless political polemic, festooned with mawkish aimlessness.

It didn’t have to be this way. Promised Land‘s script was originally developed with Dave Eggers, the acclaimed, award-winning author. The film offers the considerable acting skills of Damon, Frances McDormand, Rosemarie DeWitt, Hal Holbrook, John Krasinski, and Scoot McNairy. And, due to the hotly controversial issue of hydraulic fracturing for natural gas, the movie has had the honor of being slammed by the Heritage Foundation and petroleum lobbyists.

Promised Land is also directed by Gus Van Sant, a man who has a keen artist’s eye for both mainstream fare and indie grit. (Yes, Van Sant and Damon are reunited, so beware of the lame and painfully obvious Good Will Fracking headlines.)

See? Nothing but good résumés and intriguing publicity behind this movie. And yet it putters out into both embarrassment and creative lethargy, fueled (if that’s the term I want) by an acute lack of focus and commitment. Promised Land struggles to compel just as much as it fails to inform. By the film’s end, Matt Damon will have taught you precisely two things about fracking: That it’s bad for cows, and even worse for heartfelt dramatic monologues delivered by Matt Damon.

The film opens on Steve Butler (Damon), a well-meaning PR guru for major-league energy company Global Crosspower Solutions. Steve sees fracking and natural gas as the way of the future, and as a chance to make bank, all the while rescuing rural communities from the manacles of federal farm subsidies. He and his partner, Sue Thomason (McDormand), travel to a small town in New England to buy up land and secure popular support for drilling operations.

As you can guess, things don’t go according to plan because, A) even folks in Small Town USA have access to the Google and, B) John Krasinski shows up as Dustin Noble (Noble?), a charismatic environmental activist who literally goes around frightening the local children about how fracking will set their farmland on fire.

And there’s a love story thrown in there somewhere, involving the booze-sodden courtship between Steve and peppy schoolteacher Alice (played with charisma to the hilt by DeWitt). Though not given much more than perfunctory attention, the subplot is actually quite tender for the scant screen time it’s afforded.

“We’re not fighting for land, we’re fighting for people,” Dustin explains with all the moral force of a fortune cookie.

The real shame about Promised Land is the squandered potential. Damon is his usual commendable self, portraying a good man who balances bleeding heart and corporate mission, earnestness and cut-throat tactics. The film scores its biggest points when Damon fleshes out the real-talking operative in Steve, whether he’s threatening a self-described “Podunk” politician in a diner, or aggressively lecturing angry locals on the virtues of natural gas’ “fuck-you money.”

In moments like these, with the assured acting and razor-sharp dialogue (from a screenplay by Krasinski, Damon, and Eggers), the story indeed shows signs of life and purpose. But they are conclusively negated by an onrush of gimmicks and sentimentality—the product of the simultaneous excesses and deficiencies of an unsure narrative. So much of the movie is dedicated to the tussle between Steve and Dustin—a crash course in stagnant, platitude-burdened storytelling. “We’re not fighting for land…We’re fighting for people,” Dustin explains, with all the moral force of a fortune cookie.

As for whatever political or social statement the film has to make about the risks of fracking, it’s nothing you wouldn’t get from skimming the first couple paragraphs of the Wikipedia entry on hydraulic fracturing. The fact that these punches are so tightly pulled all but guarantees that Steve’s emotional and professional journey ends in an unsatisfying mess. When Steve finally does find his moral center—culminating in a very public display—the scene is devoid of believable emotion, or believability period. On top of all of this, there is a final plot twist—so unnecessary, so dumb, so out-of-place—that almost singlehandedly tanks any shred of dignity the film once might have possessed.

Gus Van Sant’s latest tries to teach, preach, and play upon our sense of shared humanity—but simply does not devote enough time, energy, or nuance to get any of those jobs done.

Conservative pundits and the fracking lobby have preemptively declared this movie a dud. Sadly, they may—albeit for completely different reasons—have been on to something.

Promised Land gets a release on Friday, December 28. The film is rated R for language and engulfing mediocrity. Click here for local showtimes and tickets.