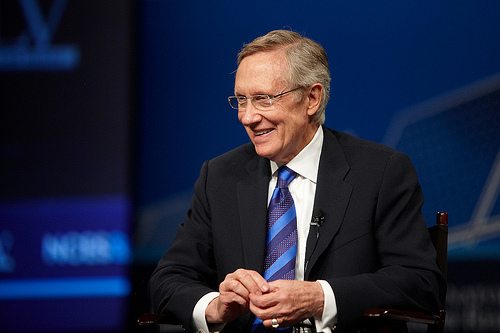 Brace yourselves, nation: It looks as if we’re headed off the so-called “fiscal cliff.”

After House Speaker John Boehner (R-Ohio) failed last week to corral enough Republican votes on a bill to let the Bush tax cuts expire for the wealthiest Americans, the spotlight moved to the Democratic-controlled US Senate. It is now up to Senate Majority Leader Harry Reid (D-Nev.), working with Minority Leader Mitch McConnell (R-Ky.) and President Obama, to forge a deal to avert the slew of tax increases and spending cuts, hitting domestic programs and the defense budget alike, that begin to go into effect on January 1, 2013. And of course any deal passed out of the Senate must also be approved by the House. Yet the prospects of a timely agreement in the Senate look grim, too.

The consensus on the Hill, Politico reports, is that a fiscal cliff deal by New Year’s Eve is “virtually impossible”:

With the country teetering on this fiscal cliff of deep spending cuts and sharp tax hikes, the philosophical differences, the shortened timetable and the political dynamics appear to be insurmountable hurdles for a bipartisan deal by New Year’s Day.

Hopes of a grand-bargain—to shave trillions of dollars off the deficit by cutting entitlement programs and raising revenue—are shattered. House Republicans already failed to pass their “Plan B” proposal. And now aides and senators say the White House’s smaller, fall-back plan floated last week is a non-starter among Republicans in Senate—much less the House.

On top of that, the Treasury Department announced Wednesday that the nation would hit the debt limit on Dec. 31, and would then have to take “extraordinary measures” to avoid exhausting the government’s borrowing limit in the New Year.

Senate Democrats are considering fallback options to resolve the crisis, but they appear unlikely to push forward if Republicans decide to mount a serious opposition. The White House, a senior administration official said, is in close coordination with Senate Democrats. Late Wednesday, Reid’s office pushed Republicans to pass a bill to extend tax rates for income below $250,000.

The fiscal cliff, to be clear, isn’t really a cliff. As Kevin Drum pointed out, it’s more of a staircase or a slope. We’re in for roughly $400 billion in tax increases and $200 billion in spending cuts, but that pain will be spread out over many months. If Congress were to cut a deal soon after January 1, the fiscal pain would be minimized; let it drag on for months and then the pain really hurts.

How much hurt? Those tax hikes and spending cuts would suck almost 3 percentage points out of the US’ gross domestic product in 2013 and nudge the unemployment rate up by a disastrous 3.4 points, according to the Congressional Budget Office.

That’s recession territory. And for the moment, that appears to be where we’re headed with Congress locked in a stalemate.