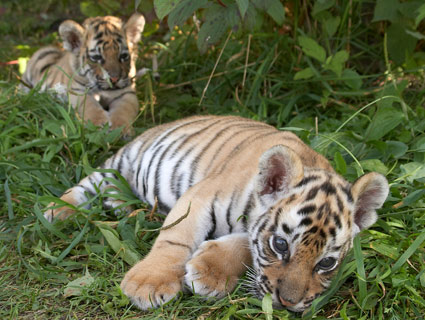 Getting your kid a book this holiday season? Before you pat yourself on the back for not buying some plastic crap destined for the dump, consider this: The book you bought might actually be destroying the rainforest.

On Wednesday, the Rainforest Action Network (RAN) announced that in the pages of several popular HarperCollins children’s books, it had found controversially sourced wood fibers, possibly connected to the destruction of the Indonesian rainforest.

RAN conducted independent forensic fiber tests on seven books and found that Splat the Cat: The Perfect Present for Mom & Dad, Talking Pictures: Images and Messages Rescued from the Past, and Fancy Nancy Splendiferous Christmas were composed of between 6 and 25 percent acacia fiber. According to RAN forest campaigner Robin Averbeck, ninety percent of acacia fibers come from plantations on land that used to be Indonesian rainforest.

Averbeck notes that converting natural rainforests to plantations can cause a host of environmental problems, including the destruction of habitat for the endangered Sumatran tiger. The total wild population of this rare tiger is less than 500, and according to Averbeck, “the pulp and paper industry in Indonesia is basically the leading threat to their habitat loss.” RAN specifically points to Asia Pulp and Paper (APP) and Asia Pacific Resources International (APRIL) as being two of the main culprits, which together produce approximately 80 percent of Indonesia’s pulp and paper.

In 2010, RAN released a report revealing that sixty percent of the children’s books produced by major US publishing companies that were tested contained paper linked to Indonesian rainforest destruction. In the six months following the report’s release, eight of the ten publishers committed to ditching controversial Indonesian fiber in their books, with HarperCollins and Disney being the only two companies not to make such assurances.

In October, Disney announced a strong new global paper policy, and according to RAN, HarperCollins remains the only major company that has not made a strong enough commitment to sustainable environmental practices.

But HarperCollins defends its practices. “We share the same goals as RAN, we want to use environmentally sustainable fibers,” Erin Crum, vice president of corporate communications, told Mother Jones.

The publishing company is communicating with its suppliers to find out what paper or fiber was used in the books mentioned in RAN’s press release. It maintains that any book published after February 2012 is compliant with an updated policy to eliminate the use of Indonesian fiber in books, and that it currently does not do business with APP or APRIL. HarperCollins also plans to institute its own independent testing process shortly, expecting results early next year.

It’s worth noting that the Fancy Nancy book that RAN tested, which contained mixed tropical hardwood and acacia fiber, was published in 2011, before HarperCollins enacted its stricter policy. The other two were published after the policy went into effect.

While RAN acknowledges that HarperCollins does have a green paper policy, the group has asked the company to set concrete goals and share how its policies are being implemented.

“No child or parent should be an unwitting participant in rainforest destruction this holiday season,” said Averbeck, in the press release.