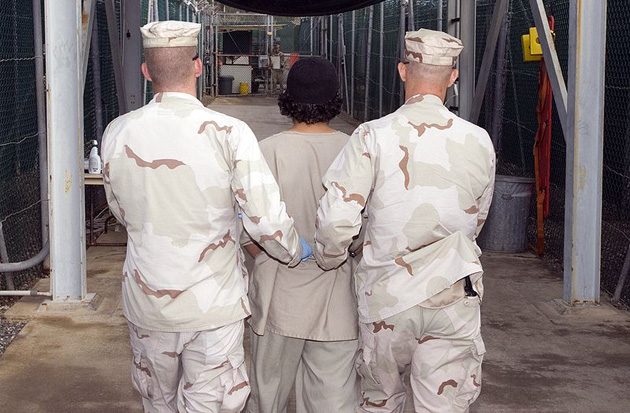 One Senate Republican likes Gitmo so much she wants to build a new offshore detention center—or at least force President Obama to allow Guantanamo to accept new detainees, which it hasn’t done since he first took office and issued an executive order intended to close the facility.

The National Defense Authorization Act for 2013 is up for a vote as soon as Monday afternoon, and Sen. Kelly Ayotte (R-N.H.) has proposed an amendment that would compel the administration to come up with “a plan for the identification or establishment of a facility outside the United States as the location for the long-term detention” of suspected members of Al Qaeda. Her amendment is backed by Sens. Joe Lieberman (I-Conn.), James Inhofe (R-Okla.), and Saxby Chambliss (R-Ga.).

Ayotte’s amendment doesn’t say that Gitmo can’t be the designated facility, but it leaves open the possibility of a new, alternative Gitmo elsewhere—as long as it’s not in the United States, where the terrorists could use their Muslim Heat Vision to escape. Ayotte’s ambiguous wording here is likely intentional, since Inhofe has proposed an amendment that would explicitly compel the Obama administration to send new detainees to Guantanamo. So where does Ayotte have in mind for America’s brand new detention facility? The Palmyra Atoll? Baker Island? Perhaps some sort of high-security facility placed on a conveniently located orbiting asteroid?

Raha Wala, an attorney with Human Rights First, says Ayotte’s amendment is probably designed to attack the administration for refusing to send new detainees to Gitmo even as Congress has made it nearly impossible to try terror suspects in the United States. “Obviously we have dozens of high-security prison facilities for dealing with terror suspects,” Wala says, “but Ayotte’s view is that we should have an offshore facility and basically Gitmoize our entire detention policy.” (Ayotte’s office did not respond to several requests for comment.)

A second offshore detention facility meant to house terror suspects indefinitely would make moot Obama’s promise to close Gitmo, but there’s already bipartisan opposition to letting that happen. Another amendment proposed by Ayotte, placing strict conditions on the transfer or release of Gitmo detainees, passed last Thursday with several Democrats crossing the aisle to join their Republican colleagues in making Gitmo all but impossible to close. Obama has threatened to veto the defense bill over those restrictions, but he’s backed down from such threats before.

Ayotte, who last time a defense bill was being crafted tried to legalize torture all over again, has interesting timing: Last week, Sen. Dianne Feinstein’s (D-Calif.) office released a Government Accountability Office report that states that civilian officials “have the correctional expertise to safely and securely house detainees with a history of or connection to terrorism.” Given that Gitmo costs about $800,000 per year per detainee, they could probably do so at a fraction of the cost.

But why not go with the asteroid thing, as long as we’re treating ourselves?