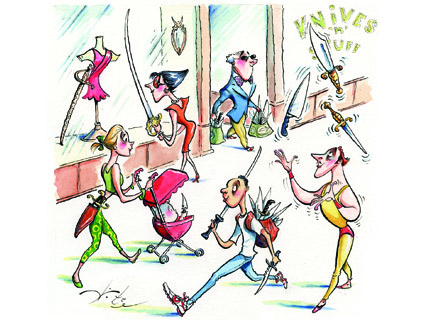 Doug Ritter was carrying two pocketknives and a Leatherman on his belt as he entered a suburban barbecue restaurant near his home in Gilbert, Arizona. “If we were in New York City right now, I could be arrested and sentenced to a year in prison for carrying these knives,” he told me as we stood in line at the counter.

Sitting down to carve into a big platter of pork and brisket, Ritter, the founder and chairman of Knife Rights Inc., laid out his arguments for restoring our right to carry switchblades, double-edged daggers, combat knives, bowie knives, stilettos, and cutlasses on any street in America. “Knives are essential tools used by millions of Americans every day, at work, at home, at play,” he said. “And on rare occasions, they’re also used as an arm in self-defense, or to defend one’s family. When the Second Amendment talks about the right to bear arms, it doesn’t specify firearms in particular.”

Ritter, a 59-year-old survival equipment expert, has carried a pocketknife since he was seven, and he feels naked without one. “It’s part of getting dressed, like pulling on your pants in the morning,” he said. He started Knife Rights in late 2006 after reading a Wall Street Journal article that portrayed military-style tactical knives as a deadly menace but offered no statistics linking them to any crimes.

His group now has more than 2,200 members. Its legal arm receives most of its funding from the knife industry. Its chief lobbyist sits on the National Rifle Association’s board of directors, and its website is strewn with overheated endorsements from the likes of Ted Nugent (“God Bless Knife Rights!”) and NRA executive vice president Wayne LaPierre.

But it might be a mistake to characterize the organization simply as a side project for gun nuts. Knife Rights’ board also includes outdoorsman, knife designer, “kitchen despot,” and Joy of Cooking heir Ethan Becker. “A significant minority of our members are hikers, backpackers, climbers, kayakers, environmentalists,” Ritter said. “It’s not a left-right, red-blue issue.”

A guide to some common (and commonly confused) knives

Sure enough, in 2009, Congress updated the Federal Switchblade Act of 1958, which had outlawed the importation and interstate trade of spring-loaded “automatic” knives amid a panic about youthful hoodlums based on the fictional violence in West Side Story and movies such as Rebel Without a Cause and The Wild One. The bipartisan amendment, signed by President Obama, ensured that knives that can be pushed open with one hand—just like the ones on Ritter’s belt and an estimated 80 percent of the nonkitchen knives sold in America—are not classified as switchblades.

Still, knives remain regulated by a complicated, contradictory patchwork of state and local laws. That’s how it used to be in Arizona: In Phoenix, you could carry a concealed pocketknife, but not a dagger or bowie knife. In neighboring Tempe, knives were banned only in bars and liquor stores. Down in Tucson, you could carry any kind of knife, openly or concealed, just about anywhere except libraries. After a lobbying campaign led by Knife Rights, the state Legislature overturned all these local restrictions in 2010, and Arizonans are now free to stroll down the sidewalk with anything from keychain pocketknives to samurai swords. The same year, the New Hampshire Legislature overturned the state’s ban on switchblades, stilettos, dirks, and daggers. In 2011, it voided municipal knife restrictions. Utah and Georgia have done the same.

“A significant minority of our members are hikers, backpackers, climbers, kayakers, environmentalists,” Ritter said. “It’s not a left-right, red-blue issue.”

But Knife Rights has run into sharp opposition in New York City. In 2010, Manhattan District Attorney Cyrus Vance Jr. held a press conference showcasing hundreds of “illegal knives” after his undercover investigators had bought dozens at stores like Home Depot and Eastern Mountain Sports. The stores agreed to pay nearly $1.9 million in penalties. An adviser to Mayor Michael Bloomberg praised the DA for removing “a threat that was hiding in plain sight.” Knife Rights is suing the city and Vance for allegedly misclassifying ordinary one-handed folding knives as illegal switchblades or gravity knives. (Gravity knives are not opened by a spring or by pushing the blade out, but rather by releasing a latch that lets the blade “drop” out.)

It’s hard to determine whether New York-style anti-knife laws actually make the streets safer. According to the FBI, knives were used in 13 percent of homicides in 2010. Jan Billeb, the executive director of the American Knife and Tool Institute (“Imagine Your Life Without a Knife”), claims that the overwhelming majority of knife crimes are committed with kitchen knives.

Ritter worries that if “the demonization of knives” continues, we’ll end up like Europe, where knives are often strictly regulated. He recalls a trip to England, where folding blades longer than three inches are illegal and you can’t carry any knife in public “without good reason.” (Self-defense doesn’t count.) Ritter was testing life rafts on a sailboat when the ropes got tangled. “The only practical solution was to start cutting some lines loose,” he recalled. “The rest of the folks were all connected with marine safety, but I was the only person that had a knife on board. Not even the captain of this boat. When I pulled it out and opened it up, it was like, ‘Oh my God, he’s got a knife. Look at that thing!’ It was a little three-inch folder, just another tool I carry, and truly a critical piece of safety gear on a boat.”

Knife Rights’ argument echoes a familiar tenet of the gun rights movement: Weapons don’t kill people—people kill people. “A screwdriver makes an excellent weapon if you want to use it that way. So does a baseball bat or a claw hammer,” Ritter said, finishing his lunch and putting down his fork and knife. “It’s irrational to believe that if you ban certain types of knives, criminals will somehow stop being criminals.”