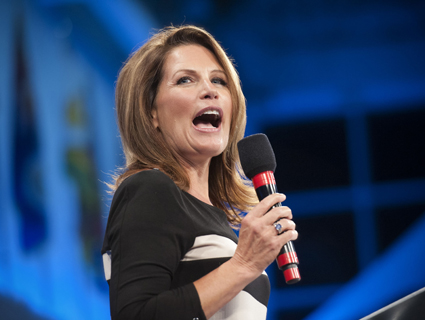 Rep. Michele Bachmann (R-Minn.) flamed out of the GOP presidential race and barely held onto her House seat in November, polling 15 points behind Mitt Romney in the state’s most conservative congressional district. This is where a typical member of Congress might reflect for a moment, tone down the rhetoric, and focus on nuts-and-bolts legislative issues to win back her constituents. Michele Bachmann is not typical.

Last weekend, she made a guest appearance on Understanding the Times, a radio show devoted to End Times prophecy whose host, Jan Markell, believes that Harry Potter is a “gateway to the occult” and that President Obama is poised to declare himself “One World President.” (Bachmann has been a frequent guest on the show and even wrote an endorsement for Markell’s Biblical prophecy conference, at which a keynote speaker warned that a two-state solution would give rise to the antichrist.)

Note from Jan: Prophecy teacher Jack Kelley writes about a man who may be waiting in the wings: The Antichrist. The world longs for a leader. The world thought they had it in Barack Obama in 2008. Now they wonder again. As we see evil arise in a shocking manner in these “days of Noah,” be encouraged that it is leading to a day when there will be a shout and the sound of a trumpet. And in the twinkling of an eye, we will leave this throbbing planet. I can almost hear the hoof beats of the four horsemen of the apocalypse. Look over a ridge and you will see them on the way.

We’re in the fast lane to the end of the age now. We have a Buddhist, a Muslim, and a Hindu in Congress so we’re one nation under many gods. We’re heading even more into rampant acceptance of same-sex marriage, abortion, and legalized recreational marijuana. Evil is called good and good is called evil. Do you have any doubt that we are officially in the “days of Noah?”

The subject of Bachmann’s interview on Tuesday? Creeping Shariah. Via Right Wing Watch, Bachmann alleged that President Obama and Secretary of State of Hillary Clinton want to “lift up Islamists” and have done the Muslim Brotherhood’s bidding. According to Bachmann, the Obama administration supports censorship of speech that’s critical of Islam, something that will bring the world one step closer to Islamist domination:

Once you take away people’s ability to be able to speak, this is not a small right, this is everything, it is game over because then all of the power and authority has been given over to the Islamist. The Islamist is the only one who gets to dictate what we can say and what we can do, and what we can print and what we not print, and who can assembly and how they can assemble, because at that point Sharia Islamic law in effect becomes the law of the land because the Islamist gets to have the authority, not anyone who opposes Islam. This is a very, very important issue.

Bachmann is a member of the House Permanent Select Committee on Intelligence.