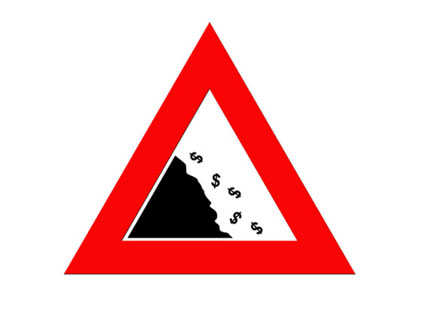 If there is no fiscal crisis, can there be a fiscal cliff?

The current hullabaloo over tax cuts, spending cuts, entitlement programs, and the debt ceiling has yielded much fodder for policy-minded columnists, practically establishing a job creation program for budget-following wonks. Recently, there have been a rash of articles from this set advancing the essential point that raising the eligibility age for Medicare, a proposal that might be on the table (that is, if there is a table), would be awful policy because doing so would remove healthier seniors from the Medicare pool and place this older group into the non-Medicare pool and boost costs there. (Health care costs would presumably go up overall—and particularly for private employers who would have to carry these 65- and 66-year-olds on their policies.) Has this spate of policy op-edding influenced the negotiating positions? We don’t know. The talks are all hush-hush. And this week, another policymeister, in one of the most consequential columns of the past fortnight, added another significant contention to the discourse: There is no fiscal crisis.

Bruce Bartlett, who was an economics official in the administrations of Presidents Ronald Reagan and George H.W. Bush, is a contributor to the New York Times‘ Economix blog, and in an important post a few days ago he delved into the Government Accountability Office’s new estimates of the federal government’s long-term budget outlook. The bottom line: “The idea that we are facing a crisis is complete nonsense.” Bartlett, by the way, considers himself a conservative, a reality-based conservative. He points out, per the GAO report:

[S]pending is not out of control. Entitlement programs like Social Security and Medicare are rising gently as the baby-boom generation retires. All other spending, including that for the military and domestic discretionary programs, falls—with the notable exception of interest on the debt. Interest rises sharply as the deficit rises, principally because the G.A.O. assumes that revenue will not be permitted to rise above its historical average—as Republicans continually insist.

In other words, the inability to raise revenue to diminish deficits—and tackle rising interest payments—is the major problem.

Here it is in chart form, courtesy of the GAO:

Note the explosive growth in net interest. Using these numbers, Bartlett writes that the GOP’s demand that Social Security and Medicare be cut immediately—say, by raising the age of eligibility for Medicare and changing the inflation adjustment formula for Social Security—is not in sync with the actual data:

To be sure, some restraint is needed in federal entitlement programs…Spending for Social Security, in particular, is very stable. Relatively modest changes, such as raising the taxable earnings base slightly, would be sufficient to put the program on a sound footing virtually forever.

Bartlett chides Republicans for droning on and on that domestic discretionary spending is responsible for bloated government. But, he points out, “such programs have already been cut sharply by the Budget Control Act of 2011.” He adds, “That leaves interest on the debt as the principal driver of long-term spending and deficits.” And if the Rs continue to resist raising revenues, he maintains, there will be higher spending for interest on the debt. (The interest line in that chart could even be much greater, if interest rates go up.)

Bartlett advocates letting all the George W. Bush tax cuts expire and all the automatic spending cuts kick in. He acknowledges that this might cause a short-term hit to the economy, but he argues that taming the deficits will lead to medium- and long-term growth. Whether that’s the right policy solution or not—it does entail a difficult trade-off—it’s at least based on data that reflects the real world.

His post, though, does make one thing clear: President Barack Obama (or anyone else) need not rush into a big deal at this moment. There is no imminent fiscal crisis regarding entitlements. The Republicans are merely hyping the matter to bolster their attempts to extract a ransom for either (a) extending the Bush tax cuts for the bottom 98 percent, or (b) acceding to a hike in the debt ceiling, which will soon reach its latest limit, or both. The sky is not falling. It is not on fire. And the cliff may not be that frightening.