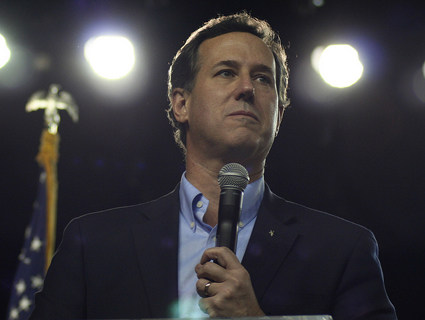 Former Pennsylvania Sen. Rick Santorum has landed on his feet after a second-place finish in the GOP primary: He’s taken a job as a columnist for the birther bible WorldNetDaily:

Rick Santorum – the former U.S. senator who ignited grass-roots conservatives as a Republican candidate for president this year – today joins WND as an exclusive columnist. His commentaries will be featured each Monday.

His first column? Sounding the alarm about the United Nations Convention on the Rights of Persons With Disabilities, which he contends “crushes U.S. sovereignty.”

WND is best known for journalistic masterpieces such as “Bill Ayers admits (again) he wrote Obama bio,” and “Obama didn’t write his own love letters,” and “The birth certificate debate – it’s not over,” and “Obama’s ring: ‘There is no god but Allah’,” and “Claim: Obama hid ‘gay life’ to become president,” and finally, “Kenyan insiders say Obama was part of takeover strategy.” One year ago, he was surging in Iowa; now he’s sharing space with Chuck Norris.

Meanwhile, Politico‘s Ken Vogel reports that former Pennsylvania Sen. Rick Santorum is quietly reaching out to donors in advance of a potential presidential run in 2016—something that seems wholly incompatible with becoming a columnist for a birther site.