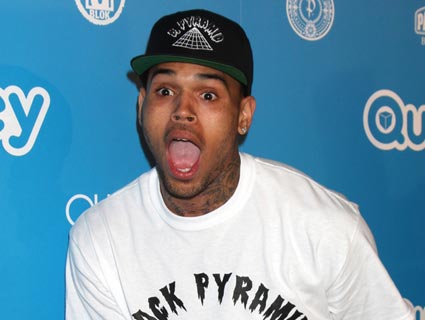 R&B pop star and convicted felon Chris Brown is no longer MIA on Twitter. In case you missed last weekend’s lurid social media drama, it kicked off with Brown posting a picture of himself and tweeting, “I look old as fuck! I’m only 23.” To which comedy writer Jenny Johnson (who describes herself in her Twitter profile as “Writer, wife, asshole and owner of 2 dogs”) tweeted back, “I know! Being a worthless piece of shit can really age a person.”

Thus began the crossfire, with Brown boasting of the various graphic sexual and scatalogical acts he would impose on his antagonist “hoe,” and Johnson, who’d been baiting him on Twitter for a while, jabbing back with a sense of humor that made Brown look like even more of an asshole. The singer eventually took himself out of the game by deactivating his Twitter account, whereupon Johnson received death threats from Breezy fans. Six days later, Brown’s Twitter account reappeared with all his old tweets obliterated.

At first, Brown’s absence seemed to indicate that Johnson had won the duel. I had intended to write about how the episode was an exception to the rule—the rule that says misogynistic pop stars can get away with treating women horribly because we’re willing to look the other way when celebrities do bad things. But now I wonder if it’s not just going to end up in the archives as yet another case of, “Oh, there goes Chris Brown being Chris Brown.”

It’s not just that the music industry has cheerfully supported Brown throughout his probation for felony assault on singer Rihanna, his former (or possibly-on-again?) girlfriend. I’m also talking about how things like this get shrugged off by music critics, or play out in conversations over hoppy beer with progressive, liberal arts types. The conversation usually goes something like:

“Have you heard so and so’s new album? He’s a genius.”

“Yeah, but he’s a terrible human being.”

My gripe isn’t just that Brown got off with zero jail time after pleading guilty to violently assaulting his girlfriend. It’s that we have a habit of endorsing, defending, and even rewarding artists (and athletes and radio hosts and movie stars) who display harmful behavior toward women, occasionally express a little remorse, and then go on reinforcing their destructive messages.

Remember Tyler, the Creator, the “art rap” guy who used to spit about gory rape fantasies? It was bad enough that music writers at one point were wiping drool off their keyboards over the dude; but it was actually being a thoughtless shock-jock that landed him his own TV show—much like Glenn Beck. Then there’s old-school Oakland rapper Too $hort, who in February offered “fatherly advice” in an XXL magazine video to boys on how to pressure middle school girls into sex. Last Tuesday, Pitchfork rated Too $hort’s new album a glowing 7.8, writing, “Nothing keeps you young like a persistent hard-on and a filthy sense of humor.” The piece neglected to mention the rapper’s struggle with comedy and paternal instincts earlier this year.

Obviously, the wiggle room we afford to celebrities goes well beyond misogynistic black rappers. (Hello, Eminem.) As noted by Cord Jefferson over at Gawker, we’ve seen defenders aplenty when famous white guys—Charlie Sheen, Roman Polanski—are accused of doing bad things. We also have a history of great literary misogynists (cough, Norman Mailer). Jenny Johnson may have offered the twitterverse a reminder of the kind of men we’re dealing with, but I wonder how many casual listeners ever bother to think about Chris Brown’s persistent celebrity and whether it trivializes violence against women.

And I get it. Who wants to be the moralizer at the turntable? God forbid that political correctness spreads from friendly office banter and into our headphones. There’s a school of thought that says politics have no place in art criticism, and that offense taken only serves to censor, rather than to liberate, conversation. Here’s my counterpoint: Politics are inherent in experiencing art, and failing to consider an entertainer’s message through a feminist lens is to censor conversation. Is it for fear of looking uncool or unforgiving that we tend to let these guys off easy? That we drop the subject? Is it because we’d rather sit back and discuss their samples and scripts than, you know, what they’re actually saying?

“I’ve decided to just think of Brown as the Monsanto of the R&B world,” celebrated New York music critic Nitsuh Abebe once wrote of Brown. He went on to explain that he saw the pop star as “this toxic and unrepentantly cruddy entity that’s wrapped so far into its industry’s food chain that it’s hard to buy anything—even simple things—without its having been involved in some way.” That might sound like resignation, but to me, unrepentant cruddiness seems like all the more reason to have a discussion.

Call it cognitive dissonance: On November 6, America’s electorate voted in big wins for women. (Although we still have a long way to go.) In the same year, we gave Chris Brown—still on probation for his vicious 2009 attack—a Grammy and the top spot on the Billboard 200.

If 2012 was a step forward for women in politics, pop music is still sending some awfully mixed messages.