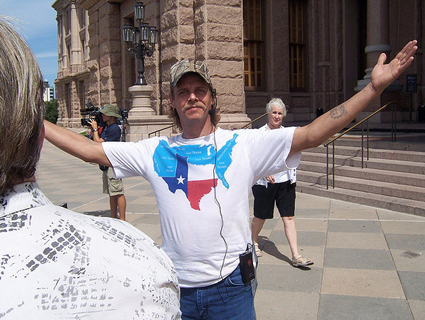 Membership in the pro-secession Texas Nationalist Movement has increased 400 percent since President Barack Obama won re-election on November 5—or so the TMN claims. Last week, the group has announced on its website that it’s taking the next step: forming a political action committee:

TNM president Daniel Miller said the TNM-PAC was formed “for the purpose of supporting and endorsing candidates at all levels that are in-line with the mission, vision and values of the Texas Nationalist Movement.”

The Texas Nationalist Movement’s foray into the world of campaign finance is its biggest step yet in an effort to enter—and eventually become—the political mainstream. It’s also peaceful, which is a noted break from another modern-day Texas secession movement, the Republic of Texas, which was helmed by an eccentric named Richard McLaren who launched an armed invasion and occupation of his neighbor’s house in Far West Texas in the 1990s.

TNM-PAC doesn’t mention any specific candidates it plans to support, but from the site it’s possible to speculate. Perennial candidate Larry Kilgore, who recently changed his middle name to “SECEDE” (yes, allcaps), received 250,000 votes in the 2008 GOP Senate primary and is planning on running for governor in two years. (Among his other issues: instituting the death penalty as a punishment for adultery) The group also touts on its site a November lecture on secession by Wes Riddle, a blogger and historic theater owner who lost a 2010 U.S. House primary despite picking up an endorsement from retiring Rep. Ron Paul.

One candidate TNM-PAC probably won’t be supporting: Governor-for-life and occasional secessionist-sympathizer Rick Perry, whose office told the Dallas Morning-News last month that he “believes in the greatness of our Union and nothing should be done to change it.”