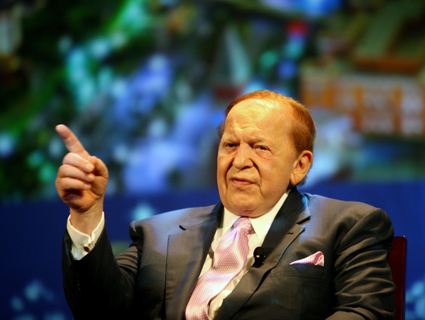 Not since the years before the Watergate scandal has a small cadre of mega-donors influenced our elections as much as wealthy givers such as casino tycoon Sheldon Adelson, DreamWorks Animation CEO Jeffrey Katzenberg, Texas homebuilder Bob Perry, and Chicago media mogul Fred Eychaner did in 2012. These men and a few dozen others pumped hundreds of millions of dollars into super-PACs and shadowy nonprofits and raised tens of millions more for presidential and Congressional campaigns.

Now, a new report titled “Billion-Dollar Democracy” by the Demos think tank and the US Public Interest Research Group, both left-of-center groups, distills all the fundraising and spending on last year’s elections and spits out an array of eye-popping factoids about where all the money came from (or most of it, at least) and how it was spent. It is vital information as reporters, activists, and others try to make sense of an election season full of firsts—the first full cycle since the 2010 Citizens United decision, the first $1 billion campaign (Obama), and the first presidential race in which both major candidates rejected public financing.

I’ve plucked out five must-see highlights from the report, with graphics courtesy of Demos and US PIRG:

It took just 32 of the biggest super-PAC donors to match the total giving—$313 million—by every single small-dollar donor to Barack Obama’s and Mitt Romney’s campaigns combined. Donors who give less than $200 aren’t disclosed, but it’s at least 3.7 million people. 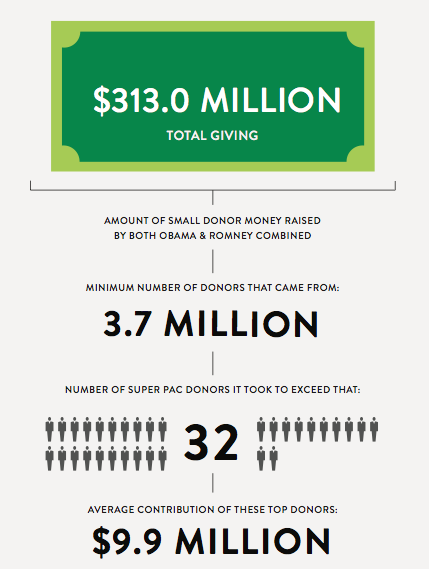 A tiny sliver of the American population supplied most of the money super-PACs used during the 2012 campaign season. How tiny? Sixty percent of all super-PAC donations came from just 159 people.

Of the $1.03 billion outside groups spent last election cycle, 31 percent was “dark money,” meaning we don’t know who gave the money or where it came from.

Dark money fueled a huge chunk of those TV attack ads you noticed during commercial breaks for Parks and Recreation. Fifty-eight percent of outside groups’ TV spending on the presidential race was funded by dark money. 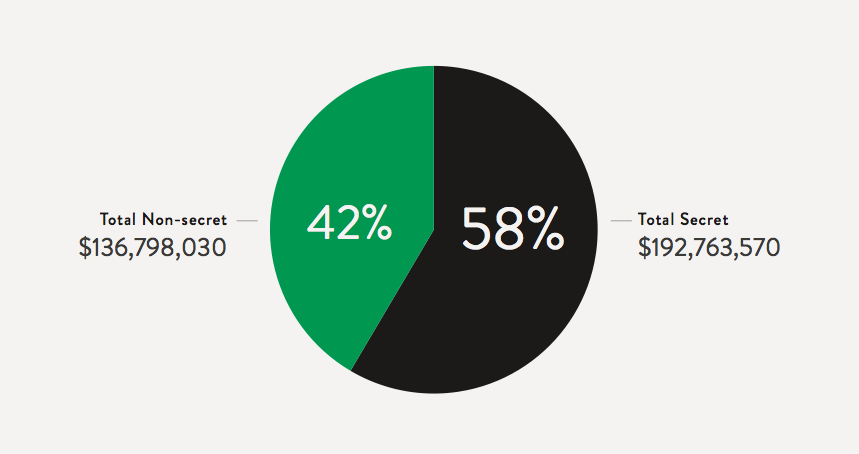 It would take 322,000 middle-income Americans—say, the entire population of Anaheim, Calif., minus a few thousand folks—giving 0.37 percent of their net worth to match casino magnate Sheldon Adelson’s $91.8 million, which was 0.37 percent of his net worth. Forbes estimates Adelson’s fortune at $20.5 billion. 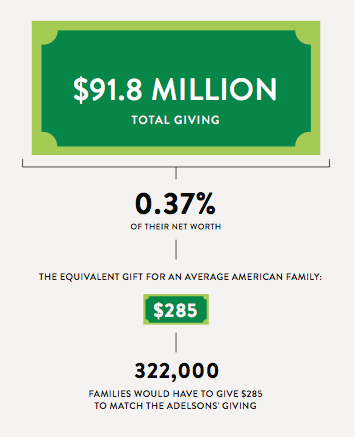