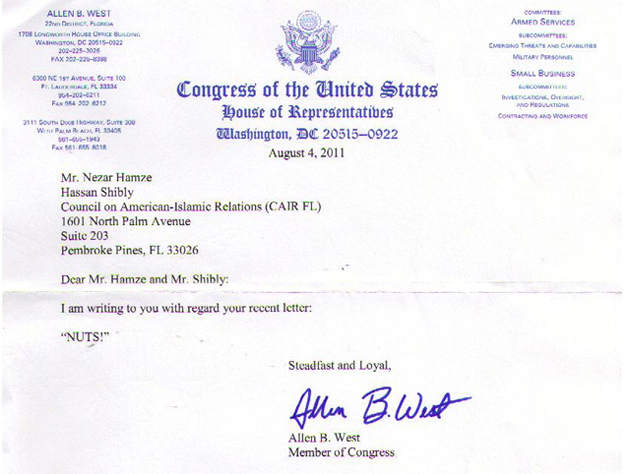 In November of 2011, the South Florida chapter of the Council on American Islamic Relations wrote to Rep. Allen West (R-Fla.) to ask him to denounce Pamela Geller, a blogger and friend of West’s whose writing on Islam has been classified as “hate speech” by the Southern Poverty Law Center. Instead, West, a notorious critic of Islam, wrote back with the one-word response you see above: “Nuts!”—a reference to Americans General Anthony McAuliffe’s message to the Germans at Bastogne.

So now that CAIR’s biggest antagonist has been forced into early retirement (effective last week), how is the organization coping? By putting the letter on eBay, apparently:

Up for Auction is one of the shortest Congressional Letters ever written in US History! This is the ORIGINAL LETTER on Official US Congressional Stationary signed by Allen West himself!This item has something for everyone. It doesn’t matter if you are a die-hard member of the Tea Party, Democratic Party, or protect the Civil Rights of Americans; this item is perfect for your collection.

Tea Party- This letter is signed by your fearless Rock Star! If you win this auction you will have signed documented proof that Allen West stood up in the face of your “EVIL” to protect the US (A “Judeo-Christian” Nation) from the Muslims. Your collection can’t go without this item.

Members of the Democratic Party- This letter represents the accomplishment of Democratic Party’s victory over Allen West. Allen West’s firebrand of politics often came with blanket insults towards Democrats with no regard of Congressional Fellowship or Respect. Vice-President Biden recently thanked Murphy at a rooftop party for running and defeating Allen West…

Protectors of Civil Rights- As you are well aware Allen West represented the antithesis of equality and fair treatment of ALL AMERICANS. If you were not part of his narrative or didn’t agree with him you were a threat to our “Gene Pool”. J Bid on this letter today as a sign of your commitment to protect ALL Americans Civil Rights. If you win this Auction you will have a little piece of US History and proof that Equality is not negotiable !

The letter is currently going for $1,575. Bidding ends January 17. Steadfast and Loyal.