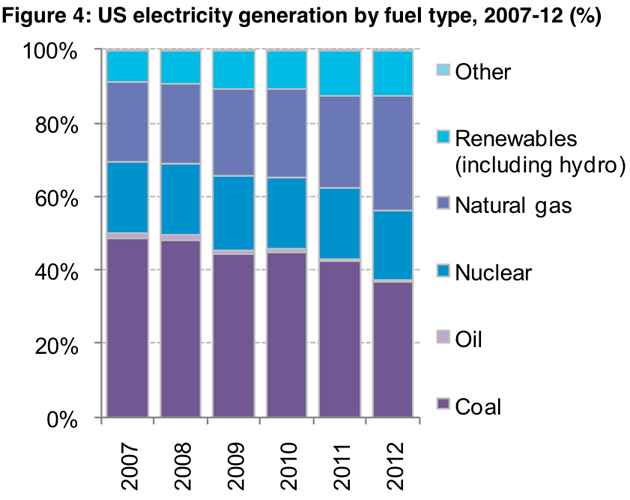 Coal use in the US is on the decline, and renewables and natural gas are both expanding to take its place. Courtesy BNEF

It’s no secret that environmentalists are going through a bit of an identity crisis when it comes to natural gas. Celebrities including Mark Ruffalo, Matt Damon, and Yoko Ono have aligned themselves with green groups like the Sierra Club to come out steadfastly against gas because of fracking, the drilling technique that harvests most of it, citing concerns about water and air contamination. Meanwhile others, including New York Mayor Michael Bloomberg and the Environmental Defense Fund, have boosted fracking as a “bridge” to wean the US off of coal, and usher in more renewables, a process that is already underway.

But a report released this morning makes it clear that the renewables industry sees itself in the latter camp, forming an unexpected alliance with the natural gas industry, since both groups are intent on giving coal the boot. The informal partnership should be a PR boon to the embattled gas industry, which has spent the last several years trying to allay concerns from the public and policymakers by shouting over the anti-fracking fracas.

“Natural gas and renewables complement each other very nicely,” Rhone Resch, CEO of the Solar Energy Industries Association, said this morning at a press conference for the release of Bloomberg New Energy Finance’s 2013 Factbook, an exhaustive analysis of the state of clean energy in America (it’s chock full of interesting charts; we pulled out a couple key ones here). The report, based on a blend of original and existing government research, is unequivocal in placing natural gas in the same “clean energy” boat as renewables, a new arrangement Resch and Dave McCurdy, head of the American Gas Association, agreed they were happy to see.

“I think it can happen: In the next 30 years we’re going to have 50 percent renewables and 50 percent natural gas,” Resch said, referring to the breakdown of US energy generation. Natural gas can fill the gap when renewables go intermittant, he said, ramping up when the wind stops or the sun goes down; meanwhile, renewables, which are growing even faster than natural gas, can pick up the slack left by a waning coal industry.

As the chart below shows, energy from coal and natural gas is still much cheaper than that from renewables (the purple bar is a range; the blue triangle the average cost). Still, this chart doesn’t account for subsidies, which make solar and wind even more competitive. And solar in particular has already made huge strides toward cheapness, the report found, dropping in price by more than half since 2009. Steps toward cost parity put renewables in a stronger position to exert pressure on coal. 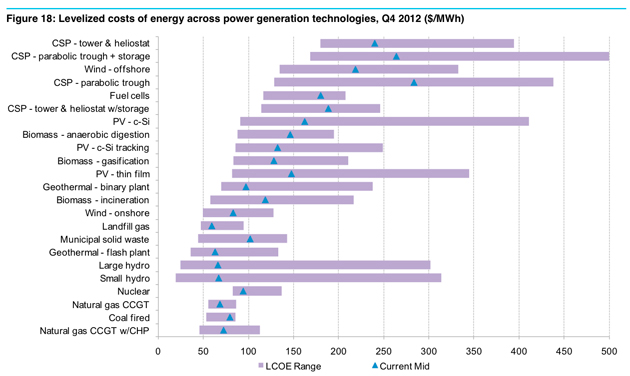 But Jenny Chang, a spokesperson for the Sierra Club’s Beyond Natural Gas campaign, says the partnership between renewables and natural gas is more unholy than happy: It distracts, she says, from the basic fact that, as a fossil fuel, natural gas can never be truly “clean.”

“It’s incredibly frustrating and incredibly manipulative” for the gas industry to align itself with renewables, Chang said. “Clean energy and natural gas are not on the same spectrum.”

Natural gas-burning power plants produce half the carbon emissions of coal-burning ones, but some researchers fear that leakage of methane—a more potent greenhouse gas than carbon dioxide—from natural gas extraction sites could offset any potential emissions benefits. At this stage, however, given the low price of natural gas, rampant fracking across the country, Obama-era emissions rules, and other factors, natural gas is on the rise and seems on track to stay that way for the forseeable future. As for its potential to form a “bridge” from coal to renewables, recent research suggests that, to hit ambitious carbon goals, the bridge would have to be quite short.

Still, Resch said he wants to encourage policymakers and activists, as renewables gain increasingly solid footing in the US enegy market, to see natural gas as a natural ally.

“I think it’s important to recognize that these industries, although we do compete,” Resch said, “are working together to address some of the most pressing energy needs in the country.”