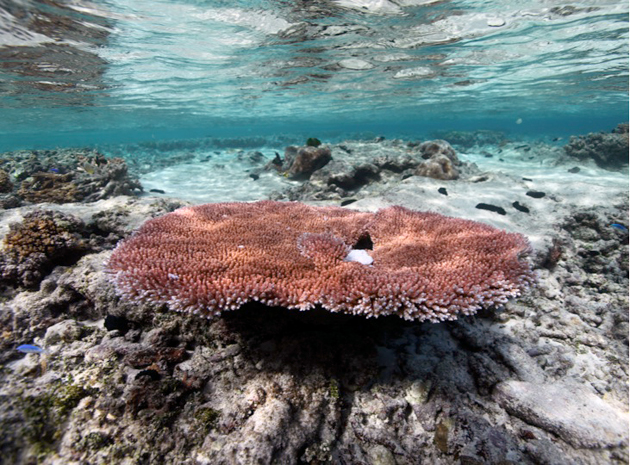 Different colonies of Acropora hyacinthus, one species examined by the Stanford team, showed different levels of heat tolerance depending on which pool they were in. Photo by Dan Barshis

In the world of coral reefs, most of the news is pretty gloomy. Rising ocean temperatures have led to massive die-offs from Indonesia to Florida; emissions-driven acidity could dissolve corals’ structure-building ability in 20 years; rising sea levels threaten to block sunlight even from healthy reefs; and in November NOAA called on Congress to afford endangered species status to over 60 species. A blunt, unsparing editorial in the Times this summer slathered on the melodrama: Coral reefs are being pushed “into oblivion… there is no hope.”

Coral are not exactly the most dynamic animals in the ocean: They take decades to grow and are then rooted at the mercy of their environment, so they don’t inspire much confidence when it comes to adapting to climate change. But a study out Monday in the Proceedings of the National Academy of Science from a group of Stanford geneticists suggests that coral might have more of a fighting spirit than we gave them credit for.

In 2000, ecologist Dan Barshis was with a research group in American Samoa, wading through tide pools, when he noticed that coral in some pools seemed healthy, despite being bathed in water much warmer than corals can normally survive, and despite the fact that individuals of the very same species were on their deathbeds in pools just down the beach. Corals get stressed when water temperatures rise, especially when it happens quickly; under enough stress, they’ll boot out the symbiotic algae that photosynthesize sunlight for the coral’s food and give the coral its signature color palette, leaving the coral pale—hence the term “bleaching”—and starving. 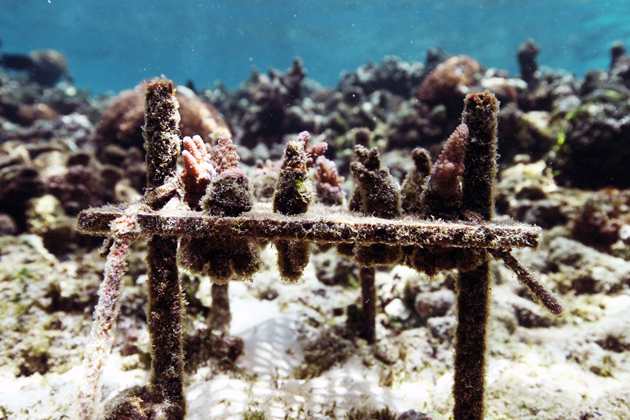 An experimental transplant setup where Steve Palumbi, Dan Barshis, and coauthor Francois Seneca moved corals from the moderate pool into the more extreme pool and vice versa to investigate whether all corals can acquire increased stress tolerance in the more extreme pool. Photo by Dan Griffin-GG Films

But the coral Barshis saw looked inexplicably happy, and over the next several years he found that the reason why is all about training. Barshis compared the genes of the heat-resistant corals and their more fragile bretheren under a range of water temperatures. He found that, in both groups, heat changed the way hundreds of genes were expressed. But in the heat-resistant group, 60 of these genes were flipped on all the time, and helping to crank out heat-resilient proteins and antioxidants. Using records of the pools’ temperatures, Barshis found that the strongest corals came from pools that were consistently but briefly exposed to high temperatures during low tides over time. He thinks the repeated exposure helped condition the corals to build up their tolerance, like an athlete building endurance through weight training, only on the level of DNA.

“It kinda comes down to what doesn’t kill you makes you stronger,” he says.

By contrast, when the unconditioned coral are suddenly exposed to hotter temperatures, it’s like “they’re caught with their guard down,” he says, and get worn out much more quickly, like a couch potato thrown into a sprint race with the athlete.

Scientists have known that heat conditioning can boost some organisms’ tolerance for high temperatures—in the lab, yeast have shown similar behavior to what Barshis and his colleagues found in the coral. But their research is the first to pinpoint the genetic basis of heat tolerance in coral, and it offers a rare spot of hope for this embattled sea critter: Scientists could use genetic engineering or selective breeding to help spread heat tolerance throughout more of the world’s coral; or, Barshis suggests genetic profiling could help locate the most resilient populations and prioritize them for conservation.

Scientists could use genetic engineering or selective breeding to help spread heat tolerance throughout more of the world’s coral.

“The more pessimistic [scientists] say, ‘Why research coral? They’re gone in a hundred years,'” says Larry Crowder, a conservation biologist at the Center for Ocean Solutions. “But the more optimistic ones are saying, ‘Not so much.'”

Corals are the center of biological diversity in the ocean, Crowder says, and losing them would deal a devastating blow to the marine ecosystem—not to mention the fish resources humans depend on. And Barshis’ research might provide a new approach to saving them. 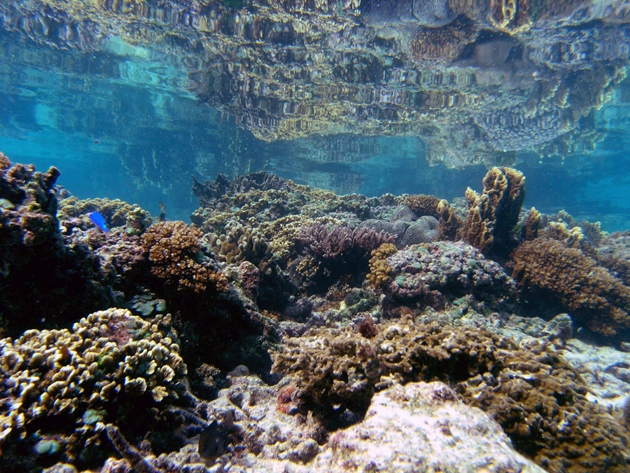 A typical low tide in the Ofu back reef. Notice the extra still surface waters, it’s this stillness that allows the water to heat up so much in the midday sun, yet a diversity of corals appear to healthily withstand these extreme temperature exposures. Photo by Dan Barshis