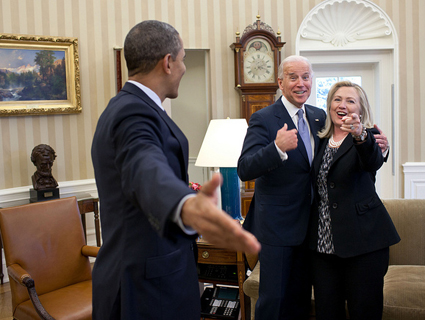 President Obama said the United States is not a "deadbeat nation." We rate that statement "half true." <a href="http://www.flickr.com/photos/whitehouse/8340841325/sizes/z/in/photostream/">White House</a>/Flickr

President Obama wanted to make one thing clear about the looming fight over raising the debt ceiling on Monday morning. “The issue here is whether or not America pays its bills,” he said at a White House press conference that touched on control, Congress, and the loneliness of the human condition. “We are not a deadbeat nation.”

“Deadbeat Nation” sounds like a great name for book. And as it turns out, it is a book. In A Nation of Deadbeats: An Uncommon History of America’s Financial Disasters, William & Mary professor Scott Reynolds Nelson argues that American history consists of a never-ending string of defaults at the individual, municipal, and state levels. Credit bubbles alternately finance transformative policies like westward expansion and infrastructure improvements, and then remake the nation’s political landscape when they invariably pop. Economist Tyler Cowen, in a New York Times Magazine review last July, needed just one sentence to summarize the book: “We have hardly ever had a well-functioning banking system.”

I spoke with Nelson on Monday to discuss the president’s statement, a hypothetical invasion of the United States by Chinese gunboats, and the role of credit crises in the rise of Mormonism.

Mother Jones: Let’s cut to the chase: Are we a deadbeat nation?

Scott Nelson: We’re not a deadbeat nation, if by that we mean the federal government paying back its debts—but we are a nation of deadbeats.

SN: States, cities, municipalities, people, individuals have not paid their debts. We’re amazingly good at making bad debt look like good debt. We have bankers who are kind of fantastic at that. Part of what the book is about is all the bad debt—consumer debt, and private debt, some state debt, municipal debt, and stuff like that. It’s just packaged garbage that collapses and leads to these financial downturns. We’ve had an amazingly kind of corrupt and ingenious sell-side [financial system]. And it’s sold lots and lots of debt, under our name, that has turned out to be bad debt.

SN: —with the Constitution itself. I talk about Alexander Hamilton creating this first Bank of the United States, and crafting it with William Duer. Insiders make a huge amount of money, but the person who becomes our first millionaire is actually William Duer, who is assistant secretary of the Treasury. Selling problematic debt and making a huge amount of money and then kind of laughing when others take it on is kind of the story in the United States.

SN: It contributed to the rise of slavery in the Deep South. There was tremendous borrowing in the 1820s and 1830s; slaves got sold down the river in booms, because lots and lots of European capital was flowing into the US to lend planters money to build cotton plantations. It’s the exploitation of Indians—we couldn’t have expanded to California, really, without all of this lending. So was it a good thing or bad thing for the nation? As a whole, it’s kind of good thing. But for our global conscience, not especially good, I suppose.

MJ: You connect the accumulation of debt to the rise of Mormonism. What’s the story there?

SN: Joseph Smith has got a lot of stories. And among the stories is that in the midst of this 1819 downturn, he says that he can find gold anywhere using a dowsing rod and a special kind of glass rock, he can look through and see where the Spaniards [buried gold]—

SN: Right, the peep stone. And he attracts all of these followers and in the midst of this downturn there’s this sort of revulsion against the Panic. In some ways, the interesting thing to me about the Mormon church is this collective uplift, without credit. They’re gonna settle in these regions, and they [have a] kind of communal responsibility that they’re gonna build the city on a hill, they’re connected to these Native Americans, but everyone is gonna profit together. That anger about these downturns leads to a kind of collectivism that’s an important part of the Mormon church. As conservative as the Mormon church is now—

SN: [Laughs.] There’s a rise in these kinds of socialist communal movements, after 1819 in particular. You saw a lot of these “corporate commonwealth” kind of things; utopian socialist groups like that emerge.

“[Adams] suggested removing all the gunboats from the Mississippi river so the British could land [and collect their debt]. That’s a really extreme solution.”

MJ: Is there historical precedent for the federal government to back out of its obligations, like House Republicans are considering?

SN: The best example is 1893. [There] was a run on the dollar, and it was basically the Republicans drastically cutting taxes. At that point there was no income tax; there was a kind of a tariff on sugar, and that is what they cut. It’s part of this deal to destroy a New York sugar manufacturer’s trust to help a Californians’ trust. Sugar, it turns out, is like one-third of the federal income. So, by drastically cutting taxes in this way, it starves the federal government of cash. Bankers agree that the Treasury has to have $100 million in gold in it to kind of function. Once that number drops below $100 million in 1893, the financial panic begins.

The weird irony: It’s almost kind of the reverse of now. There’s so much revulsion with what the Republicans do by cutting the sugar tariff that the Democrats effectively fill Congress by 1892, so they’re left holding the bag for this downturn.

MJ: And this all ended with Grover Cleveland minting a $1 trillion coin.

SN: Grover Cleveland [works] in concert with J.P. Morgan. Morgan is able to effectively sell American debt. Americans themselves are persuaded that no one trusts the US anymore, but Morgan knows that Europeans in the long term will trust the government and makes a mint.

MJ: The trillion-dollar coin has been received with a mixture of amazement and mockery. Is that the most extreme solution we’ve had? In your book, you mention John Quincy Adams—

SN: Yeah, where he suggested removing all the gunboats from the Mississippi river so that the British could land [and collect their debt]. That’s a really extreme solution.

In a way, the trillion-dollar coin is a clever way of getting at this central issue, which is that the Federal Reserve is separate from the federal government. Basically, the Constitution says the states can’t issue currency, but it also implies that the federal government can’t do it, either. So we’ve got this deus ex machina, which is the Federal Reserve. I’ve not been following the trillion-dollar coin too closely, but what are some of the other results of how we solve this problem? We got a civil war in part because of the Panic of 1857. There are more extreme solutions to these problems than a trillion-dollar coin, in part because a lot of people are at risk here.

SN: I hadn’t thought about that.