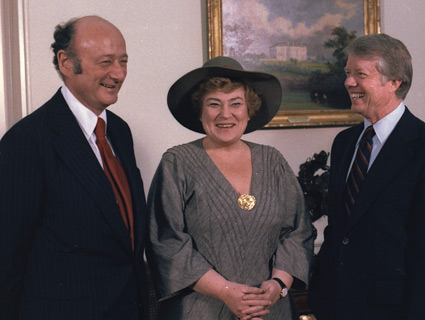 This fiercely honest tribute to Ed Koch, the hard-nosed and exuberant figure who ruled New York City from 1978 to 1989, briskly strings together interviews with the late former mayor, grainy archival footage, harshly critical testimony from Koch’s contemporaries, and a rollicking classic-rock soundtrack. The result is a documentary that intrigues and intoxicates like a David Mamet stage play.

The finest moments in the film, which premieres Friday in New York City, focus on Koch’s rise to power in the late ’70s, when the Big Apple was a powder-keg metropolis engulfed in financial disarray and a crime wave. Koch—a closeted homosexual and iconoclastic liberal—is depicted as the consummate political shark, siphoning off key constituencies during a gang-fight-like mayoral election in 1977. Neil Barsky, a former hedge fund manager and economic reporter for the Wall Street Journal, directs with a gritty cinematic zeal.

Ed Koch spent his final days as he always was: charmingly megalomaniacal. “This belongs to me…Thank you, God,” Koch, 88, says as he reminisces about his tenure as chief of the Empire City—where he pissed off scores of feminists, Jews, African Americans, and hardened lefties alike. Overall, Koch is a riveting portrait of a towering and polarizing man.