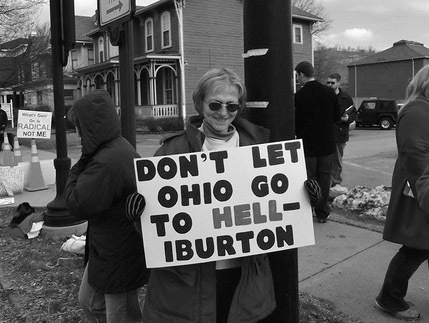 First, the good news: Using the process known as hydraulic fracturing to create natural gas wells produces less wastewater than wells created using more conventional methods, according to a new study in the journal Water Resources Research. Scientists from Duke and Kent State universities found that fracked wells create 35 percent as much wastewater per unit of gas when compared to conventional wells. The scientists note that this upsets the common idea that fracking creates more wastewater than other types of gas extraction.

But now the bad news. Because of fracking, gas extraction is up 570 percent since 2004 in the Marcellus shale region, which means that there’s a whole lot more wastewater overall to deal with.

Because of fracking, gas extraction is up 570 percent since 2004 in the Marcellus shale region.

“On one hand, shale gas production generates less wastewater per unit,” explained co-author Brian Lutz, an assistant professor of biogeochemistry at Kent State. “On the other hand, because of the massive size of the Marcellus resource, the overall volume of water that now has to be transported and treated is immense. It threatens to overwhelm the region’s wastewater-disposal infrastructure capacity.”

Ohio can’t do much to stop Pennsylvania from shipping its wastewater over the border due to the interstate commerce clause in the Constitution, which stipulates that only Congress can regulate this type of interstate trade. The best the state can do is set tougher rules on disposing of that wastewater, which has been discussed but not acted upon. Citizens in Mansfield, Ohio, voted last year to block injection wells in their town, however.