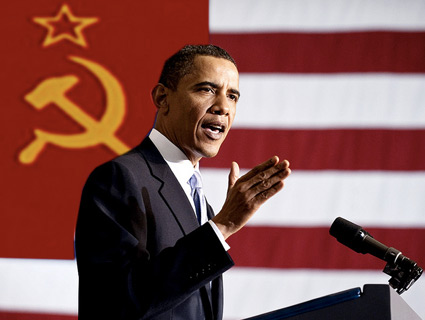 According to a guy who’s questioned Barack Obama’s citizenship, thinks America is headed for a Leninist dictatorship, and has called evolution and other science “lies straight from the pit of Hell,” the president and his congressional allies are taking their marching orders from the Constitution…just not the American one.

The Soviet Union was dissolved in December 1991. For all his years in the public eye, Barack Obama has only ever had mean things to say about the former Communist state. It’s pretty clear that there’s nothing to suggest that President Obama adheres to the “Soviet constitution.” What isn’t clear is which Soviet constitution Broun was referring to.

During the seven-decade existence of the Soviet Union, the government approved three separate constitutions. There is the one approved in 1924, which defines the “camp of capitalism” as “national hate and inquality, colonial slavery and chauvinism, national oppression and massacres, brutalities and imperialistic wars.” The one adopted in 1936 (also called “Stalin’s Constitution”) actually pays a lot of lip service to universal suffrage, individual rights, health care, and the like. And the constitution adopted in 1977 (also called the “Brezhnev Constitution”) praises the Soviet people, their army, and Vladimir Lenin for winning the Russian Civil War and therefore starting the “epoch-making turn of mankind from capitalism to socialism.”

I reached out to the congressman’s Washington office to ask which of these three he meant. Perhaps Broun was referring to all of them. I will update this post if I get a response.