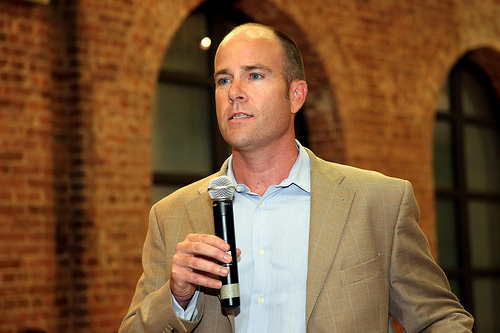 Earlier this week, the Sierra Club announced that it is lifting its long-standing institutional prohibition on civil disobedience so that it can protest the development of the tar sands. The club’s board of directors approved the change, which executive director Michael Brune made public on Tuesday. While staff and board members have previously participated in acts of civil disobedience in a personal capacity, this is the first time that the organization will take part.

The group has been mum on exactly what sort of civil disobedience it is planning. It is cosponsoring an anti-Keystone XL rally on the National Mall on February 17 with 350.org and the Hip-Hop Caucus, but says that the civil disobedience will be a separate event.

I caught up with Brune on Thursday to talk about what this means for the 120-year-old environmental organization.

Mother Jones: So is this only allowing civil disobedience related to the tar sands, or does it open it up the possibility to use it for other issues as well?

Michael Brune: Right now the board has authorized us to do this singular action on tar sands and climate. It will have a broad frame of wanting the president to be as muscular in his approach to fighting climate change as he can, with a particular focus on the tar sands pipeline.

MJ: What was it about this issue in particular that forced the change?

MB: Look at what’s happened in just the last year. Record-breaking wildfires, unusual heat waves in Chicago last February, a full degree warmer in the lower 48 than we’ve ever seen, droughts, Hurricane Sandy, the derecho, bizarre storms happening all across the country. It’s clear that our climate is already destabilizing, and it’s also clear that there’s a lot that the president can do to solve the problem. So we need to provide as much urgency and focus to ensure that the president’s commitment is an enduring one and that his ambition meets the scale of the challenge.

MJ: Has the Club ever officially done civil disobedience?

MB: The Club has never officially done civil disobedience in our 120-year-history. There was a standing rule, an explicit prohibition on civil disobedience that the board has lifted. I don’t know exactly when it was put in place, but it’s been in place for decades. When it’s used rarely, in extraordinary conditions, American history shows that it has done a great deal in helping to address injustices. We think that given the time we’re in right now, with the threats we face from climate change, and the opportunities we face from a clean energy transition, that we need the strongest possible leadership from the president. And civil disobedience can help to provide that.

MJ: What do you think that civil disobedience can accomplish on this issue?

MB: Civil disobedience can help to focus attention on a particular injustice. It was used historically to highlight wrongs in society—turning ancient redwood forests into paper towels or preventing people from sitting down at lunch counters because of the color of their skin. On climate change, we have not seen strong leadership coming from Washington, DC. In particular the president has an enormous opportunity to follow up on his inaugural speech with a concerted course of action to aggressively take on a clean energy transition. Civil disobedience can help provide the momentum for him to do that, and that’s why we’re engaging in it.

MJ: What does the environmental community need to do push Obama on this?

MB: It’s not all in DC. A lot of the work is happening out in the states. Individual communities are working to retire old, dirty coal plants and replace them with wind and solar. There are lots of communities that are organizing to fight fracking in their backyards and invest in clean energy instead, or to stop coal export terminals or LNG export terminals. Most of the progress in the last four years has been made outside the Beltway. Inside the Beltway, I would say that the environmental movement needs to demonstrate in physical form that we have political power and we are prepared to use it to support strong climate champions and to show that there are consequences to those who are on the wrong side of this issue.

MJ: So, what sort of acts of civil disobedience to you foresee taking part in?

MJ: Are you going to chain yourself to something? Are there limits to what you’re willing to do?

MB: No comment. Look, the way in which we’re going to engage, the tactic itself won’t be remarkable. What I think will be notable is who it engages and why.

MJ: Do you personally plan on taking part?

MJ: Does this change the nature of the work that Sierra Club does?

MB: I think it’s an evolution. We’ve had Sierra Club members who have done this as individuals for long periods of time. The Club is unique in that we’re a volunteer-driven organization that has a big toolbox. We’ve got chapters in every state that are organizing, lobbying, litigating, and using social media to drive change. And that will continue to be the heart of what we do, empowering millions of people to take action for a better planet. The civil disobedience just offers us one mechanism that should be used under extraordinary circumstances to try to break impasses when we see them. I think civil disobedience is only effective when it’s used as a last resort, or if it’s seen as an extraordinary thing.