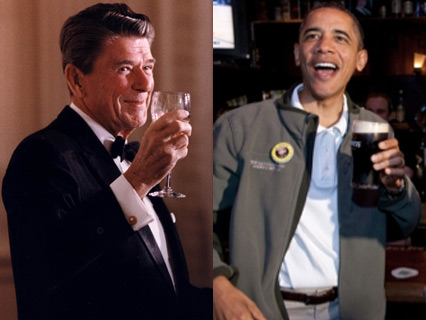 There’s a new rumor going around that the University of Chicago wants to pave what’s left of Reagan’s paradise and put up a socialist parking lot.

On Wednesday, the UK tabloid the Daily Mail published a story claiming that the university had plans to demolish Ronald Reagan’s childhood home in Chicago (832 E. 57th St.), to make room for a parking lot for a potential Barack Obama Presidential Library. It goes without saying that this would be flipping one gigantic bird to the American right.

It was at this apartment building that Reagan survived a severe bout of pneumonia. It’s also where the future president was living when his older brother was run over by a horse-drawn beer wagon (the incident wasn’t fatal, but left a long scar on his leg). In 2004, the University of Chicago bought the land encompassing the apartment building where the 40th President of the United States lived between the age of 3 and 4. Residents were ordered out in 2010. The Commission on Chicago Landmarks denied the structure “landmark status,” which gave the university the greenlight to take a bulldoze to the vacant six-flat building to make way for planned campus expansion.

“Some have said that the liberal Chicago establishment does not want a reminder that Reagan, a conservative icon, once lived in the city,” the thinly sourced Daily Mail report reads.

The original Mail article was based on a Washington Times piece that ran last Friday on the paper’s “Communities” page. “Individual [Communities] contributors are responsible for their content, which is not edited by The Washington Times,” reads a disclaimer to the right of the item. “The opinions of Communities writers do not necessarily reflect nor are they endorsed by the Washington Times.”

The parking-lot claim made in this Washington Times post—the root of this latest conservative freak-out—is based entirely on speculation.

Currently, there is no actual evidence that the University of Chicago (an institution long famous for promoting economic theories that could fairly be classified as “Reaganomics“) is planning to flatten one of Reagan’s former homes for the sake of an Obama parking lot. First of all, the location of Obama’s inevitable presidential library hasn’t even been decided yet—the stiff competition has come down to the University of Chicago and the University of Hawaii. The university’s plans involve something that is more mundane and far less troll-y than any pro-Obama conspiracy: According to the school’s representatives, they’re just trying to build more facilities for scientific studies.

“832 E. 57th St. is one of a number of vacant buildings the University owns that will be taken down to allow for expansion of the medical and biological research campus,” Jeremy Manier, news director at the University of Chicago, wrote in a email to Mother Jones. “The University’s permit request currently is under review by the city. Recent media reports that have speculated on other potential uses of the property are inaccurate.”

To those chasing the @mailonline “scoop” about alleged Obama library parking lot – stand down. The report is false. Shocking, I know.

So there you go. The Great Obama Library Parking Lot Scandal of 2013 is just one more Obama-related rumor among conservative circles that completely falls apart the moment you bother to make a short phone call.