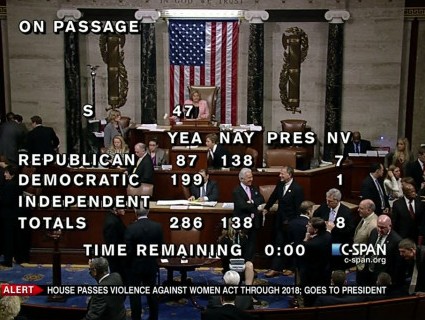 On Thursday, following a heated debate on the House floor, lawmakers passed the reauthorization of the Violence Against Women Act. Republicans had held up the law for more than a year over provisions designed to protect undocumented immigrants, Native Americans, and members of the LGBT community. In a separate, earlier vote, the House rejected an alternative, stripped-down VAWA pushed by House Majority Leader Rep. Eric Cantor, instead embracing the bipartisan version of the bill the Senate passed last week.

The Senate version of the bill, however, was itself a modified version of Democrats’ original bill, passed after Democrats acquiesced to Republican objections and removed a section that would have made more visas available to undocumented victims of domestic violence who help law enforcement prosecute their abusers. But the Senate’s compromise bill wasn’t good enough for the House Republican leadership, who introduced an alternate version that removed protections for members of the LGBT community and made it harder for tribal courts to prosecute non-Indian abusers.

Rights groups panned the House GOP leadership’s version of the bill and pushed the House to approve the Senate version. For reasons that are still unclear, the House Republican leadership went ahead and allowed lawmakers to vote on both the Republican alternative and the bipartisan Senate version of the bill. The Associated Press reported that a letter from several Republican lawmakers to the House GOP leadership may have convinced the leadership they didn’t have the votes to block the VAWA reauthorization again. The letter urged the Republican leadership to pass an inclusive version of VAWA that would “reach all victims and perpetrators of domestic violence, dating violence, sexual assault, and stalking in every community in the country.”

Terry O’Neill, president of the National Organization for Women, argues that Republicans came back from the November elections knowing they would have to move on VAWA. “Elections matter,” O’Neill says. “What happened between the 112th and the 113th Congress is that everybody in the country became sharply aware that the Republican Party has a problem with the issue of rape.”

Thursday’s vote was much closer than 2005, the last time the Violence Against Women Act was reauthorized. This year, the bill passed 286-138, with just 87 Republicans joining all 199 Democrats (one Democrat did not vote). In 2005, there were only four “no” votes.