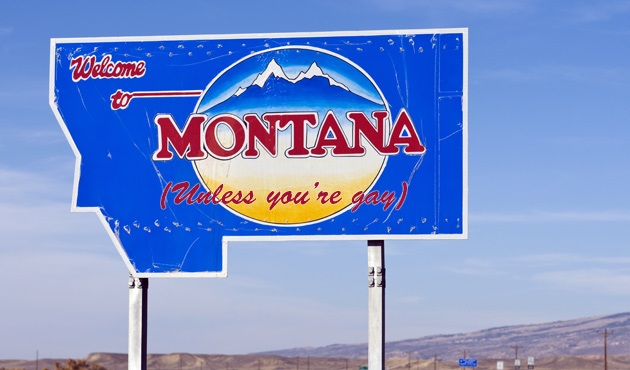 On Wednesday, by a 38 to 11 vote*, the Montana state Senate passed SB 107, a bill to “generally revise deviate sexual conduct laws.” Put another way: They voted to decriminalize homosexuality.

Although the 2002 Supreme Court case Lawrence v. Texas ruled that state laws prohibiting sodomy are unconstitutional, the effect has been slow to sink in. Montana is one of four states, along with Kansas, Oklahoma, and Texas, that still have laws on the books specifically outlawing gay sex. Ten more states—Idaho, Utah, Michigan, Virginia, North Carolina, South Carolina, Louisiana, Mississippi, Alabama, and (obviously) Florida—maintain a blanket prohibition on sodomy for persons of all sexual orientations.

The laws have stayed on the books partly because of institutional inertia; culling unenforceable laws isn’t exactly the most urgent issue facing cash-strapped states. But when advocates have generated legislative momentum to repeal the sodomy statutes, they’ve invariably been thwarted. As I reported in 2011, lawmakers in Texas have repeatedly sought to purge the state’s anti-sodomy law from the books without success. (It likely doesn’t help matters that GOP Gov. Rick Perry believes Lawrence was wrongly decided.) In 2012, Kansas Gov. Sam Brownback, also a Republican, formed an Office of the Repealer to delete unnecessary laws from the state books, but pointedly left out his state’s invalidated ban on sodomy.

This isn’t the only notable LGBT legislation up for consideration. Another bill before the legislature would extend the state’s anti-discrimination protections to gays and lesbians for the first time—a more substantive reform that advocates hope would serve as a bulwark against bullying.

But neither proposal stands much chance of becoming law in 2013. As the Billings Gazette notes, a bill to eliminate the sodomy statute passed the Senate in 2011 only to fail in the house. “We are expecting this bill to go to House judiciary, which is a very ideologically driven committee, and we expect it to die in that committee,” says Jamee Greer, a lobbyist for the Montana Human Rights Network, an LGBT equality group. “They’re not showing a lot of respect to the LGBT community and I don’t expect them to pass 107.”

*Among the 10 Republicans voting against it: This guy.