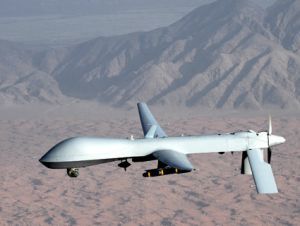 If a high-ranking administration official does it, it’s not illegal. At least not when we’re talking about ordering the death of an American citizen the administration believes to be associated with Al Qaeda.

That’s the conclusion of a Department of Justice “white paper” obtained by NBC’s Michael Isikoff, who published it Monday night. The paper outlines the Obama administration’s legal rationale for the targeted killing of US citizens suspected of terrorism abroad. Administration officials have previously defended such killings as lawful in public. But the white paper, which according to NBC was provided to members of the Senate intelligence and judiciary committees last June, lays out those arguments in greater detail.

The paper states that the US government can kill its own citizens overseas if:

(1) An informed, high level-official of the U.S. government has determined that the targeted individual poses an imminent threat of violent attack against the United States.

(2) Capture is infeasible, and the United States continues to monitor whether capture becomes feasible; and

(3) the operation would be conducted in a manner consistent with applicable law of war principles.

This refers to all targeted killing—not just operations using drones, government officials could theoretically send assassins to hunt down suspected terrorists. The paper states that in order to be killed under this program, an individual must be part of Al Qaeda or its “associated forces.” Al Qaeda’s “associated forces” include groups such as Al Qaeda in the Arabian Peninsula that did not exist in 2001 but that the government nevertheless believes is covered by the 2001 Authorization to Use Military Force against the perpetrators of the 9/11 terrorist attacks.

Although the administration has previously said that President Barack Obama makes the final call on targeted killing decisions involving Americans, based on recommendations from high-level national security officials, the white paper says that a decision of what it calls “extraordinary seriousness” need not involve the president—nor even multiple people. Instead, the paper argues, a single “high level-official,” whose authority is undefined, can approve a death sentence for an American citizen as long as the target is too difficult for the US government to capture and the loss of civilian life that would result from a targeted killing is not deemed excessive.

When the paper says “imminent threat of violent attack against the United States,” however, “imminent” means something other than what you might expect. All it means is that the executive branch of the US government must make a secret, unilateral determination that the person it wants to kill is a member of a terrorist organization: “The condition that an operational leader present an ‘imminent’ threat of violent attack against the United States does not require the United States to have clear evidence that a specific attack on U.S. persons will take place in the immediate future,” the paper notes. Not since the torture memos themselves have we seen such a bald defiance of what words actually mean. In the white paper, the government explains its broad definition of “imminent threat” by arguing that delaying a targeted killing “until preparations for an attack are concluded, would not allow the United States sufficient time to defend itself.”

Since the administration’s “kill list” is secret, those targeted have no opportunity to challenge their designation as terrorists who may be deprived of life by a “high level national security official.” Nevertheless, the paper concludes, the Due Process Clause—the part of the Fifth Amendment to the Constitution that protects Americans from being deprived of “life, liberty, or property, without due process of law”—”would not prohibit a lethal operation of the sort contemplated here.”

The idea that a government official can rubber-stamp the killing of an American citizen echoes the conclusion of Supreme Court Justice Clarence Thomas in Hamdi that “due process requires nothing more than a good-faith executive determination.” (Or as Stephen Colbert put it, “due process just means there’s a process that you do.”)

The Obama administration claims that the secret judgment of a single “well-informed high level administration official” meets the demands of due process and is sufficient justification to kill an American citizen suspected of working with terrorists. That procedure is entirely secret. Thus it’s impossible to know which rules the administration has established to protect due process and to determine how closely those rules are followed. The government needs the approval of a judge to detain a suspected terrorist. To kill one, it need only give itself permission.