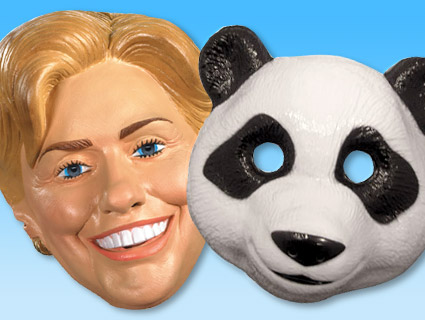 An internal investigation of FreedomWorks—the prominent conservative advocacy group and super-PAC—has focused on president Matt Kibbe’s management of the organization, his use of its resources, and a controversial book deal he signed, according to former FreedomWorks officials who have met with the private lawyers conducting the probe. One potential topic for the inquiry is a promotional video produced last year under the supervision of Adam Brandon, executive vice president of the group and a Kibbe loyalist. The video included a scene in which a female intern wearing a panda suit simulates performing oral sex on Hillary Clinton. [Author’s note: The previous sentence contains no typos.]

In December, after months of bitter in-fighting, two members of FreedomWorks’ board of trustees—C. Boyden Gray, the White House counsel for President George H.W. Bush, and James Burnley IV, a secretary of transportation during the Reagan years—notified Kibbe that they had received “allegations of wrongdoing by the organization or its employees” and had hired two lawyers, Alfred Regnery and David Martin, to investigate. Soon after, Regnery and Martin began interviewing past and present FreedomWorks employees and officials. This list included Dick Armey, the former House majority leader who in November resigned as chairman of the group (and pocketed an $8 million payout), citing concerns about the management of the organization. The investigating lawyers, Armey says, “picked my brain. I told them a forensic audit would be imperative because so much is hidden there.”

One former FreedomWorks official says three “investigative themes” emerged when he was interviewed by Regnery and Martin. The two attorneys indicated they were examining the book deal that awarded Kibbe the profits from a book whose production, several former FreedomWorks officials say, involved extensive use of the organization’s resources. Kibbe has contended that he wrote the book without significant help from FreedomWorks. (Armey and two former officials have also told Mother Jones that the nonprofit bought thousands of copies of Kibbe’s book from retail sources in an attempt to land it on bestsellers lists. FreedomWorks, one former staffer says, “used tens of thousands of dollars, if not hundreds of thousands of dollars, to promote this book.”)

The investigative team has also discussed with former staffers Kibbe’s use of his expense account. “The question is whether Matt Kibbe used FreedomWorks resources and donor funds to live the high life,” one past staffer says. And Regnery and Martin have questioned FreedomWorks sources about management and personnel matters. A former FreedomWorks official says Kibbe and Brandon ran the group as a “cult of personality” geared toward promoting Kibbe, and that Kibbe at times issued crude guidelines for hiring women based on their appearance. The investigators, according to a witness interviewed by them, have “asked about a hostile work environment that also included Adam [Brandon] pitting people against each other.”

“I heard complaints of insensitive, boorish behavior and of obnoxious references to the condition of pregnancy,” Armey says. “Such comments put you in jeopardy of lawsuits.” A former FreedomWorks official says, “There was a pattern of misbehavior and inappropriateness that rubbed people the wrong way.”

Some FreedomWorks staffers worried last year about a promotional video created ahead of FreePAC, a FreedomWorks conference held on July 26, 2012, where thousands of conservative grassroots activists nearly filled the American Airlines Center in Dallas to hear from tea party favorites, including Glenn Beck and Sen. Mike Lee (R-Utah). The short film hailing FreedomWorks was intended to play on the large video screens inside the arena.

In one segment of the film, according to a former official who saw it, Brandon is seen waking from a nap at his desk. In what appears to be a dream or a nightmare, he wanders down a hallway and spots a giant panda on its knees with its head in the lap of a seated Hillary Clinton and apparently performing oral sex on the then-secretary of state. Two female interns at FreedomWorks were recruited to play the panda and Clinton. One intern wore a Hillary Clinton mask. The other wore a giant panda suit that FreedomWorks had used at protests to denounce progressives as panderers. (See here, here, and here.) Placing the panda in the video, a former FreedomWorks staffer says, was “an inside joke.”

Another FreedomWorks staffer who worked there at the time confirms that “Yes, this video was created.”

Days before the FreePAC event, the video was screened for staff. “My mouth was wide open,” a former official recalls. “‘What the hell is this?'” Several FreedomWorks staffers were outraged and stunned that Brandon, the group’s second-in-command after Kibbe, had overseen the video’s production, appeared in it, and intended to show this film at the conference, which would be attended by many social-conservative activists. They raised objections to the film.

“How was that not some form of sexual harassment?” a former FreedomWorks official asks, noting that two female interns had been requested to act out a pretend sex scene. “And there were going to be thousands of Christian conservatives at this thing. This was a terrible lack of judgment.”

Brandon, a former FreedomWorks official says, defended the film, insisting it was creative and funny. But eventually a decision was made not to show the video at FreePAC.

Armey says he didn’t became aware of the film until months later: “I heard they had made an obscene video mocking Hillary Clinton.” He says he was told the video showed Clinton having sex with an intern. “I asked another [FreedomWorks] guy if he had seen it,” Armey recalls. “He said, ‘I heard about it. I was traveling at the time. It was shown around the office.'” Armey adds, “There was a concern that this kind of behavior could land you in court. I was shocked at the ugly and bad taste.”

Former FreedomWorks officials who have been interviewed by Regnery and Martin say they do not know if the Clinton-panda video is under scrutiny by the investigators. But they say the episode was symptomatic of problems within the group.

Kibbe, Brandon, and Jackie Bodnar, director of communications for FreedomWorks, did not respond to requests for comments. Nor did they respond to emails containing a list of questions regarding the video and the internal investigation. Asked to comment on the film, Burnley did not indicate whether the lawyers were examining this matter or whether the board of trustees was aware the video had been made. In an email, he noted, “I’m not comfortable being drawn into a dialogue with you about such allegations. I believe this is a situation in which a ‘middleman’ doesn’t make sense. If those who say they have such information about such matters will communicate directly with me, I would be most appreciative…Of course, if the allegations are plausible, I will have to follow up appropriately.”

The ongoing internal investigation, one former staffer notes, could end badly for FreedomWorks, which for years has been a powerhouse organization of the right. “I think the whole thing will implode,” this person says, “and it will be destroyed out of mismanagement and hubris.”

UPDATE: As several readers have noted, the obscene scene in the video was likely based on a bizarre scene in Stanley Kubrick’s The Shining.