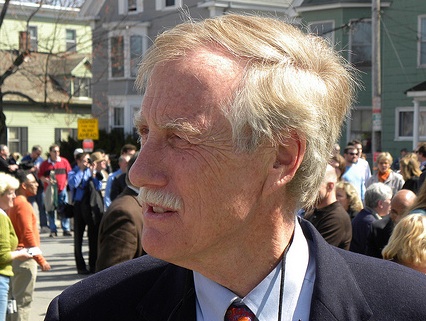 The United States should set up a secret court that would consider the use of lethal force against American terror suspects abroad, Sen. Angus King (I-Maine) said Thursday at the Senate intelligence committee hearing on White House counterterrorism adviser John Brennan’s nomination to head the Central Intelligence Agency.

“Having the executive be the prosecutor, judge, jury and executioner is very contrary to laws and traditions of this country,” King told Brennan. King suggested that the court would involve a “FISA-type process,” referring to the Foreign Intelligence Surveillance Court, the secret court that considers requests for surveillance against people who are suspected of working for foreign governments. “At least that would be some check on the activities of the executive.” The days, weeks, and months-long process of determining whether someone can be targeted, King suggested, meant that targeted killing was not like soldiers shooting each other on a traditional battlefield and should be subjected to some form of judicial accountability.

Brennan was negative to non-committal, telling King that although the idea was “worthy of discussion,” that courts were traditionally used for adjudicating guilt or innocence, not to prevent the sort of “imminent” threat Brennan claims lethal force is reserved for. A recently leaked Department of Justice memo on targeted killing, however, defines “imminence” as membership in a terrorist organization, not necessarily involvement in an unfolding plot that threatens American lives. Nor are courts used solely to adjudicate guilt—King noted that judges also approve warrants.

When asked about the targeted killing process earlier in the hearing, Brennan said that the administration goes through “agony” before determining whether a strike should take place. But the agony isn’t great enough for Brennan to want someone outside the executive branch to double-check the administration’s decision. Speaking to Senator Ron Wyden (D-Ore.) later in the hearing, Brennan said “any American who joins Al Qaeda, will know full well that they have joined an organization which is at war with the United States.” That’s true, but saying someone has joined Al Qaeda isn’t the same as proving it.