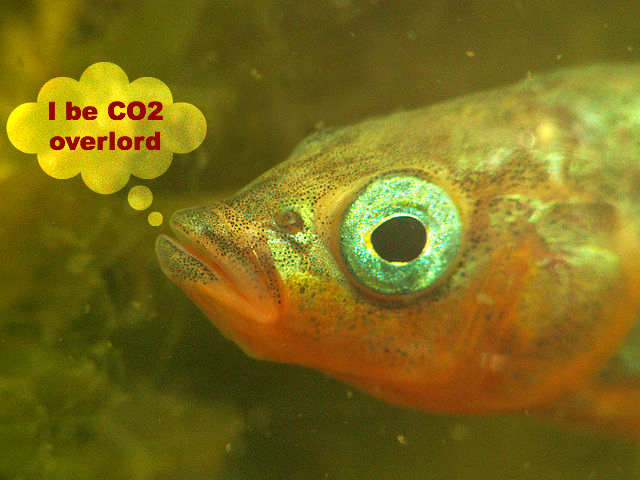 The three-spined stickleback is a regulator of carbon dioxide emissions in its ecosystem:Piet Spaans (Viridiflavus) via <a href="http://commons.wikimedia.org/wiki/File:GasterosteusAculeatusMaleHead.JPG">Wikimedia Commons</a>:

Top predators do more than regulate prey populations (think wolves and deer). They also regulate carbon dioxide emissions. At least they do in freshwater ecosystems—where if you take away the top predators CO2 emissions rise a staggering 93 percent.

This according to a new paper in the latest Nature Geoscience that holds ramifications for a lot more than marshes. “Predators are disappearing from our ecosystems at alarming rates because of hunting and fishing pressure and because of human induced changes to their habitats,” said lead author Trisha Atwood, at the University of British Columbia.

I wrote in an earlier post here on research showing how the loss of biodiversity (itself often a function of the loss of top predators) likely alters CO2 dynamics and other issues of global change as much as greenhouse gases. 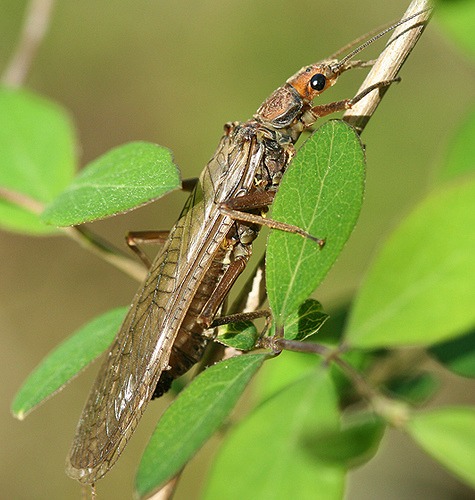 Food web theory posits that predators influence the exchange of CO2 between ecosystems and the atmosphere by altering processes like decomposition and primary production (a function of the numbers and diversity of plants).

To test that theory, the researchers experimented on three-tier food chains in experimental ponds, streams, and bromeliads in Canada and Costa Rica by removing or adding predators. Specifically by adding or removing three-spined stickleback fish (Gasterosteus aculeatus) and the invertebrate predators stoneflies (Hesperoperla pacifica) and damselflies (Mecistogaster modesta). When all the predators were removed the ecosystems emitted a whopping 93 percent more carbon dioxide to the atmosphere.

“We knew that predators shaped ecosystems by affecting the abundance of other plants and animals,” says Atwood, “but now we know their impact extends all the way down to the biogeochemical     level.”

We monitored carbon dioxide fluxes along with prey and primary producer biomass. We found substantially reduced carbon dioxide emissions in the presence of predators in all systems, despite differences in predator type, hydrology, climatic region, ecological zone and level of in situ primary production. We also observed lower amounts of prey biomass and higher amounts of algal and detrital biomass in the presence of predators. We conclude that predators have the potential to markedly influence carbon dioxide dynamics in freshwater systems.