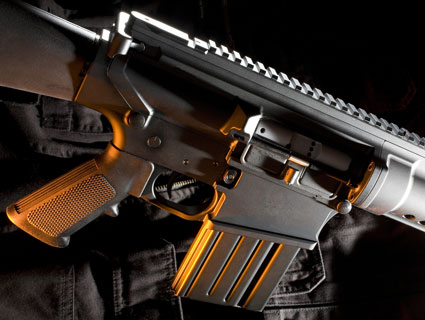 The Senate Judiciary Committee met again on Thursday morning to discuss Sen. Dianne Feinstein’s (D-Calif.) bill to ban assault weapons, and advanced the legislation to the full Senate by a 10 to 8 party-line vote. The bill bans magazines holding more than 10 rounds of ammunition and outlaws the further manufacture of 157 specific models of guns, while grandfathering existing assault weapons. It will almost certainly die on the Senate floor, where a GOP filibuster is expected to prevent it from even getting a vote.

Feinstein got into a tense exchange with GOP Sen. Ted Cruz (Texas), who pointedly challenged her on whether the bill complied with the Second Amendment or would be struck down by the U.S. Supreme Court.

Sen. Richard Blumenthal (D-Conn.), whose state saw the death of 20 children in the Sandy Hook Elementary School shooting in mid-December, said such weapons are “primarily for criminal purposes” and it was “simply appropriate” to ban them.

But Sen. John Cornyn (Texas), the second-highest Republican in the Senate, said he “must strongly oppose” the Feinstein proposal and echoed the GOP position — backed by the powerful National Rifle Association — that the measure was overly broad and failed to address the problem of the “seriously mentally deranged” getting guns.

Cornyn, though, did suggest he might support a potential bipartisan compromise on universal background checks if a deal can be reached when the gun bill comes to the Senate floor in coming weeks. Democratic Sens. Chuck Schumer (N.Y.) and Joe Manchin (W.Va.) are searching for GOP backers for that legislation after talks with Sen. Tom Coburn (R-Okla.) broke down.

Despite the contention from Sen. Cruz that a renewed assault weapons ban might be unconstitutional, the Supreme Court has never struck down such a ban and has stated that the right to own firearms is “not unlimited.” Republicans were also quick to point out that Feinstein’s bill, introduced after the massacre at Newtown in December, would ban semiautomatic rifles used in only a fraction of gun deaths each year in the United States. However, both the assault weapons and magazines that would be banned under Feinstein’s bill have often been used by mass shooters like Adam Lanza. And while many handguns come standard with magazines of more than 10 rounds, one former special agent with the Bureau of Alcohol, Tobacco, Firearms, and Explosives told Mother Jones recently that it is often access to a high-capacity magazine that “turns a killer into a killing machine?.”