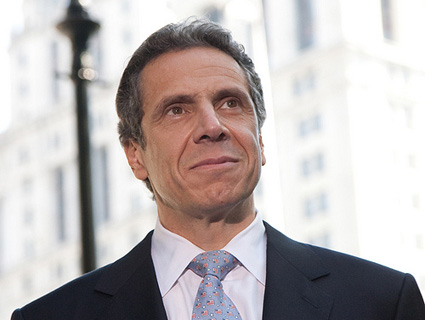 In late January, New York’s Democratic Gov. Andrew Cuomo signed into law the nation’s toughest assault weapons ban, the first gun control legislation passed in the wake of Newtown. But on Wednesday, Cuomo told reporters that he and legislative leaders would reverse one of the bill’s most controversial measures, which limited magazines to no more than seven rounds, before the law goes into effect on April 15.

“There’s no such thing as a seven-bullet magazine. That doesn’t exist, so you really have no practical option,” Cuomo said. Democrats plan to adjust the bill amid other legislative talks so that the new gun law will conform with existing state regulations banning magazines holding more than 10 rounds. Cuomo denied that the change would amount to a “rollback”; instead, he said, it’s just a measure to clean up “ambiguities” and “grammatical errors” in the bill. It also appears to be a concession to ammunition manufacturers that potentially would’ve been hurt by the new law.

Still, the language on seven-round magazines won’t be completely wiped from the bill. Cuomo said that while New Yorkers would still be able to buy 10-round magazines under the new assault weapons ban, they will face misdemeanor charges if they carry more than seven bullets in those magazines unless they’re at a gun competition or shooting range. The president of the New York Rifle & Pistol Association, who has been preparing a lawsuit to overturn the law, told the AP that Cuomo’s proposed revision will not change his plans to file suit.

New York is one of just five states that limits magazines to 10 rounds. Colorado’s Democratic Gov. John Hickenlooper signed gun legislation on Wednesday that included a 15-round magazine limit, which has also prompted the threat of lawsuits and the avowed departure of the state’s largest magazine producer.

The apparent political appetite for stricter gun controls in the wake of the shocking Newtown tragedy may be starting to dull. Sen. Dianne Feinstein’s (D-Calif.) federal assault weapons ban appears to be all but DOA in the Senate. However, on Wednesday Vice President Joe Biden told NPR that the Obama administration isn’t giving up the fight yet.