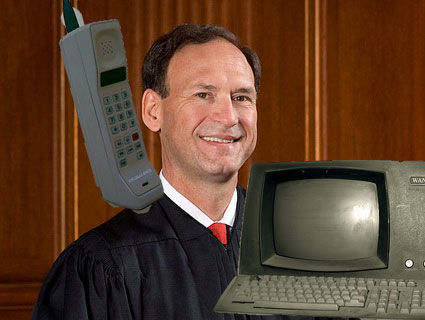 “You want us to step in and render a decision based on an assessment of the effects of this institution which is newer than cellphones or the internet?” Alito said to Solicitor General Donald Verrilli Jr. “We do not have the ability to see the future.” The framers presumably left the “no ruling on things younger than cellphones or the internet” clause on the cutting room floor while they were putting together Article III of the US Constitution.

As it happens, the mobile phone, which was invented in 1973, predates Alito’s bachelor’s degree, and the Internet dates back to the 1960s (although the World Wide Web came into being in 1993). And Alito hasn’t always been so reluctant to rule on things “newer than cellphones or the internet.” Here are a few examples:

Either restricting people’s fundamental rights based on sexual orientation is unconstitutional or it isn’t. This list is by no means exhaustive—it’s just a handful of cases in which Alito has been able to figure out how to interpret the Constitution without an egg timer.