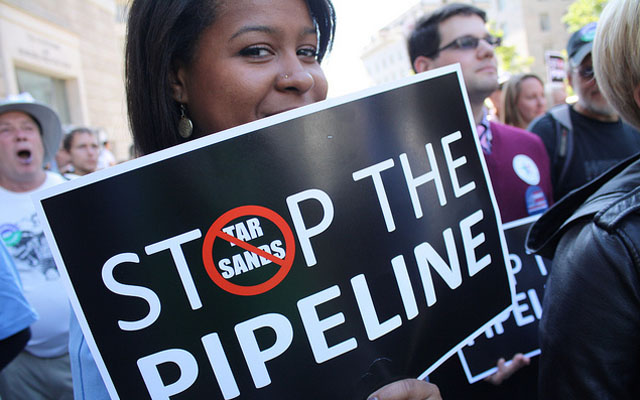 A woman protests the Keystone XL pipeline at a rally in Washington, DC, on October 7, 2011.<a href="http://www.flickr.com/photos/perspective/6222453924/sizes/z/in/photostream/">Elbert Barnes</a>/Flickr

Late on a Friday afternoon in early March, the State Department released a 2,000-page draft report downplaying the environmental risks of the northern portion of the controversial Keystone XL pipeline, which would ferry oil from Canada’s tar sands to refineries in Texas, passing through Montana, South Dakota, Nebraska, Kansas, and Oklahoma. But when it released the report, State hid an important fact from the public: Experts who helped draft the report had previously worked for TransCanada, the company looking to build the Keystone pipeline, and other energy companies poised to benefit from Keystone’s construction. State released documents in conjunction with the Keystone report in which these experts’ work histories were redacted so that anyone reading the documents wouldn’t know who’d previously hired them. Yet unredacted versions of these documents obtained by Mother Jones confirm that three experts working for an outside contractor had done consulting work for TransCanada and other oil companies with a stake in the Keystone’s approval.

When the Keystone report—officially known as a “draft supplemental environmental impact statement”—was released, environmental activists ripped it as shoddy and misleading. Russ Girling, TransCanada’s CEO, cheered the report as “an important step” toward receiving President Barack Obama’s final stamp of approval for the pipeline.

But there was something strange about ERM’s conflict-of-interest filing: The bios for the ERM’s experts were redacted.

Here’s what those redactions kept secret: ERM’s second-in-command on the Keystone report, Andrew Bielakowski, had worked on three previous pipeline projects for TransCanada over seven years as an outside consultant. He also consulted on projects for ExxonMobil, BP, and ConocoPhillips, three of the Big Five oil companies that could benefit from the Keystone XL project and increased extraction of heavy crude oil taken from the Canadian tar sands.

Another ERM employee who contributed to State’s Keystone report—and whose prior work history was also redacted—previously worked for Shell Oil; a third worked as a consultant for Koch Gateway Pipeline Company, a subsidiary of Koch Industries. Shell and Koch* have a significant financial interest in the construction of the Keystone XL pipeline. ERM itself has worked for Chevron, which has invested in Canadian tar sands extraction, according to its website.

Here is ERM’s redacted filing as it appeared on the State Department’s website (begin reading on page 30):

Here is the unredacted version:

So who hid ERM’s connections to TransCanada?

ERM spokesman Simon Garcia directed all questions to the State Department. TransCanada spokesman Grady Semmens said that although the company paid for ERM’s analysis (as is common practice), TransCanada did not control what State and ERM released to the public. “The Department of State was responsible for posting the conflict of interest statements and has complete control over all activities of ERM,” Semmons wrote in an email. “TransCanada does not direct or control ERM’s actions in any way. TransCanada does not speak for the State Department with respect to the details of how it manages its review process.”

After a half-dozen inquiries, a State Department official emailed this statement: “Some information in the administrative documents that was required for State Department conflict of interest procedures has been redacted. This redaction protects the private information of ERM’s previous clients.” Asked who exactly made the redactions, the official said: “On background, I don’t know.”

The State Department appears to be responsible for the attempt to mask the ERM-TransCanada connection. When State first posted the redacted ERM filing, it was possible to digitally remove the redaction and read the ERM bios. But some days later, a new version of the filing was posted online in which the ERM bios had been scrubbed from beneath the redactions.

The State Department has faced heaps of criticism for potential conflicts of interests involving TransCanada and Keystone XL. In October 2011, Obama’s reelection campaign hired Broderick Johnson, who had previously lobbied in favor of Keystone, as a senior adviser. Emails obtained by Friends of the Earth, an environmental group that opposes the Keystone pipeline, revealed a cozy relationship between TransCanada lobbyist Paul Elliott and Marja Verloop, an official at the US Embassy in Canada whose portfolio covers the Keystone project. Before he lobbied for TransCanada, Elliott worked as deputy campaign manager on Hillary Clinton’s 2008 presidential bid. Clinton served as secretary of state until recently.

The State Department’s inspector general disagreed with critics who cried foul over these apparent conflicts of interest. In February 2012, the IG found no evidence of bias in State’s handling of the application to build the pipeline.

President Obama has the final say the fate of the Keystone XL. The president, who says he supports an “all of the above” energy policy, delayed a decision on the pipeline in November 2011 until after the 2012 elections, and has remained coy ever since. He has downplayed the idea that building the Keystone will create jobs, but has not ruled out building it.

The president is facing huge pressure from energy interests and environmental groups. TransCanada has spent millions of dollars lobbying for the pipeline. The environmental group 350.org and many other advocacy organizations have protested the Keystone in front of the White House and urged Obama to kill the project. A final decision on the Keystone XL remains months, if not a year or more, away.

Update: After this story was posted, a spokeswoman for Koch Industries, Melissa Cohlmia, wrote in an email that “Koch has no financial stake in the Keystone XL pipeline and that we are not party to its design or construction. We are not a proposed shipper or customer of oil delivered by this pipeline.” In 2009, Koch subsidiary Flint Hills Resources Canada told (PDF) Canadian regulators it had “a direct and substantial interest” in the application to build the Canadian portion of the Keystone pipeline. (Here’s Koch’s take on that.) A spokeswoman for Canada’s National Energy Board told InsideClimate News that Flint Hills got involved in the Keystone application process because it had a “business interest.” Steven Paget, vice president of energy infrastructure at FirstEnergy Capital in Calgary, told InsideClimate News that the Keystone pipeline would raise the price of Canadian crude oil, benefiting all companies in the oil sands business. (Flint Hills describes itself as “among Canada’s largest crude oil purchasers, shippers, and exporters.”) A 2010 report by Accufacts Inc. noted that a Koch subsidiary’s refinery in Corpus Christi is one of 22 refineries equipped to handle the type of heavy crude oil that Keystone XL would carry from Canada to Texas. Asked to further discuss Koch and Keystone, Cohlmia declined.

Return to the story.