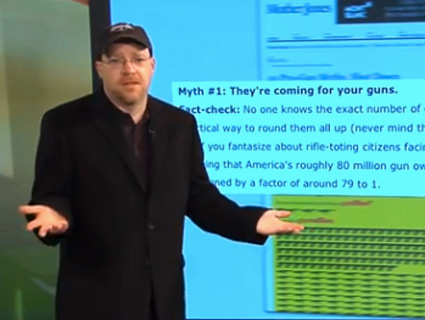 In “10 Pro-Gun Myths, Shot Down”, I collected a range of research and statistics that challenge some of pro-gun advocates most popular sound bites. The National Rifle Association took notice and has been returning fire with a series of short videos attacking the “media misinformation.” The clips score a couple of good points, but they’re far from bulletproof. So let the debunking of the debunking of the debunking begin!

Myth #1: They’re coming for your guns.
“Mother Jones is right,” declares NRA News host Cam Edwards as he kicks off what he promises will be a 10-part rebuttal. “There is no way to round up all the privately owned firearms in the United States.”

That hasn’t stopped his colleagues at the NRA from claiming that the government will soon be coming for your guns. The group’s executive vice president, Wayne LaPierre, has long insisted that the Obama administration is behind a secret “conspiracy” to impose “gun owner licensing and gun registration regimes that could be used for gun prohibition, confiscation, and ultimate destruction.” (He was at it again recently, claiming universal background checks would lead to your guns being taken away.)

Besides, nobody in Washington is proposing gun confiscation. Tellingly, Edwards only cites nonlawmakers, such as this Daily Kos writer, who have called for restrictions far beyond anything being considered on Capitol Hill. And regulating firearms doesn’t make confiscation inevitable. For example, the National Firearms Act of 1934, which requires the owners of machine guns and sawed-off shotguns to register with the federal government, led to no such roundup, and today machine guns are hardly ever used in crimes. When it passed, the law was endorsed by the NRA.

Edwards is correct that the suicide rate is much higher in virtually gun-free Japan. (Most Japanese suicides are hangings.) Obviously, gun availability isn’t the only factor behind suicides in Japan (or the United States). Yet internationally, as the World Health Organization reports, readily available firearms “facilitate unplanned suicide acts” and “increase the suicide frequency.”

Edwards goes on to cite Chicago and Houston as examples of how gun availability doesn’t correspond with gun use: Legal guns are easily obtained in Houston, which has a relatively low murder rate, but hard to come by in Chicago, which has a high murder rate. Of course, Chicago’s murder rate is not the result of its strict gun laws or a lack of guns. Instead, it’s partly the result of the looser gun laws elsewhere in Illinois and in other states, which is where most of the weapons used in crimes in the Windy City come from.

Myth #3: An armed society is a polite society.
Edwards doesn’t like the road rage study I cited, and responds with a story that pops up if you Google “concealed carry road rage.” It’s about a Wisconsin man with a licensed concealed weapon who was allegedly attacked during a road rage incident and cooled things down by brandishing his gun.

Fair enough. Now let’s look at the third result that comes up in Edwards’ search. It’s a blog post that recounts the story of another Wisconsin man involved in a road rage incident in January. Instead of keeping his cool, he allegedly drew his gun and told the other driver, “That’s right—don’t (expletive) around in a concealed-carry state.”

And if you want to keep relying on anecdotes rather than research, google “NRA road rage” for numerous posts about NRA president David Keene’s son, who was sentenced to 10 years in federal prison for shooting at another motorist in 2002.

Myth #4: More good guys with guns could stop rampaging bad guys.
Mother Jones‘ own research on 30 years of mass shootings has found that none have been stopped by an ordinary citizen using a gun. This finding has galled commentators like Edwards who insist that we’re trying to prove a negative: After all, whenever an armed citizen stops a shooter in public who has yet to kill four or more people, hasn’t a potential mass killing been averted? In theory, perhaps. In reality, it’s almost never happened, including in the cases we examined with fewer than four fatalities.

Myth #5: Keeping a gun at home makes you safer.
Edwards is not eager to acknowledge the well-documented fact that owning a gun comes with serious risks. “They [Mother Jones] also say that every time a gun is used in self-defense in the home, it’s used a jillion times more for assaults or murders or suicides or accidents, so why on Earth would anyone want to own a firearm?” Guns do not have to be fired to be used defensively, he notes, and are successfully used in self-defense between 100,000 and 2.5 million times a year.

Stats on defensive gun use are murky—they tend to be based on self-reporting—and are subject to much debate. The 2.5 million figure widely cited by pro-gun advocates is based on a 1995 survey whose results appear to be unreliable and exaggerated. For instance, 8 percent of those who said they’d used a gun in self-defense claimed to have wounded or killed the person threatening them. As one critique of the survey (PDF) observes, if that figure were correct, more criminals would be wounded by civilians every year than the total number of people known to be treated for gunshot injuries. The 2.5 million figure also assumes that around one-third of those defensive gun uses take place during burglaries. Yet comparing that figure (PDF) against reliable crime statistics produces the implausible scenario that every single burglar in America has been confronted by a victim with a gun.

Myth #6: Carrying a gun for self-defense makes you safer.
That’s not to say that guns aren’t successfully used in self-defense. For some examples, check out the NRA’s The Armed Citizen blog, the site Keep and Bear Arms, or this map from the Cato Institute. While these sites paint a picture of armed Americans waging a constant battle against criminals, the rate at which they cite successful uses of guns in self-defense suggests that it is a relatively rare phenomenon. (One NRA tally of “armed citizen” incidents lists just 13 from January and February of this year.)

This doesn’t alter some of the basic facts about gun violence. As Dr. Mark Rosenberg, the former head of the Centers for Disease Control and Prevention’s National Center for Injury Prevention and Control, told ProPublica, “We were finding that most homicides occur between people who know each other, people who are acquaintances or might be doing business together or might be living together. They’re not stranger-on-stranger shootings. They’re not mostly home intrusions.” Unfortunately, that line of inquiry was shut down when the NRA convinced Congress to cut off federal funding for research on gun violence.

Edwards also suggests that perhaps the increase in the number of legally owned guns has something to do with the recent decrease in crime. Actually, it probably has more to do with lead—and not the kind in bullets. (See the chart to the right.) And for more on this, read Kevin Drum’s story on the environmental factors behind the violent crime rate.