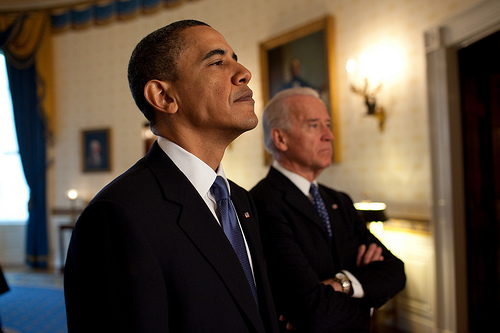 With the Senate continuing its attempts to reach a bipartisan compromise on a gun-control package, President Barack Obama held a press conference at the White House Thursday morning urging strong action.

Surrounded by mothers “whose children were killed as recently as 35 days ago,” Obama touted the work of Vice President Joe Biden’s gun violence task force, which produced 23 executive actions aimed at reducing gun violence. The task force also recommended that Congress pass a package of new laws that includes universal background checks, a new assault weapons ban, and a ban on high-capacity magazines.

“None of these ideas should be controversial,” Obama continued. “What we’re proposing is not radical. We’re not taking away anybody’s gun rights.”

Gun advocates, of course, see things differently. Senate Majority Leader Harry Reid (D-Nev.) has promised to allow the Senate to vote on the assault weapons ban introduced by Sen. Dianne Feinstein (D-Calif.) as an amendment, after leaving it out of the main gun-control package in fear that it would prevent the larger bill from passing. Pro-gun Republicans have threatened to filibuster any bill they think “will serve as a vehicle for any additional gun restrictions,” and there is limited bipartisan support for strengthening background checks.

Obama’s conference was a brief, emotional appeal for common-sense gun reforms. He was introduced by Katerina Rodgaard of Moms Demand Action for Gun Sense in America, a mother and dance instructor whose former student Reema Samaha was one of the 32 people killed by a gunman in the 2007 Virginia Tech massacre. Families of Newtown victims also sat in the audience.

After the nation’s recent string of mass shootings, “I felt it was no longer safe to raise a family in America,” Rodgaard told the crowd.

While there will always be gun violence, Obama said, “we can make a difference.” He mentioned a recent article that suggested Washington is missing its opportunity to seriously reform gun laws as the public’s memory of Newtown fades away.

“Let me tell you, the people here don’t forget,” Obama said. “Shame on us if we’ve forgotten.”