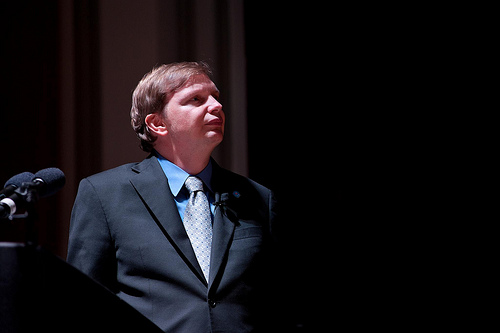 Liberals agree: Organizing for Action, the pro-Obama nonprofit formed out of the president’s reelection campaign, has an admirable goal—helping Obama enact his second-term agenda, which includes gun-control measures, immigration reform, and new action on climate change. OFA’s problem, in their eyes, is how it plans to meet that goal.

Early news stories revealed that OFA planned to raise $50 million, much of it in big donations, from individuals, corporations, and unions. OFA would also disclose the names of its donors and fundraisers quarterly but without saying precisely how much they’d chipped in. In response, liberal campaign finance groups howled; one, Common Cause, publicly urged Obama to shut down OFA.

OFA has heard the complaints. Today, in a CNN.com op-ed, OFA director Jim Messina laid out the case for OFA and clarified that the group would not accept any money from corporations, foreign sources, or federally-registered lobbyists. OFA will also disclose, every four months, the exact amount given by every donor who chips in more than $250.

That’s more than previously expected of OFA, and the group’s critics are encouraged by Messina’s pledge. Common Cause president Bob Edgar praised the move, but added OFA should go even further by putting a cap on how much a single donor can give and throwing its organizing muscle behind new campaign finance regulations. “That means getting behind legislation like the DISCLOSE Act, supporting a constitutional amendment to overturn Citizens United and rein in runaway political spending, and developing a new, small-donor public funding system that lets candidates break their dependence on big money,” Edgar said in a statement sent to reporters.

OFA, as Politico‘s Ken Vogel points out, has already benefited from in-kind corporate support. January’s “Road Ahead” conference, where OFA was first unveiled to a hand-picked group of big-wig Democratic fundraisers, was sponsored by a group called Business Forward, which receives money from Microsoft, Walmart, and other corporations.

OFA’s ban on lobbyist money may be hard to enforce. President Obama imposed a similar ban on donations from lobbyists for his reelection campaign, yet the New York Times reported in October 2011 that the campaign’s corps of elite fundraisers included at least 15 people involved in lobbying. Those fundraisers were not federally registered lobbyists, but fit the description of your typical Washington lobbyist. One such fundraiser, Sally Susman, raised more than $500,000 and at the same time ran Pfizer’s lobbying office; another, David Cohen, ran Comcast’s lobbying shop.

Messina also used his CNN op-ed to take a stab at addressing one of the biggest criticisms of OFA: that it was a vehicle for selling access to the president. One report said that donors and fundraisers who ponied up $500,000 or more would get quarterly meetings with Obama. In his op-ed, Messina writes, “Whether you’re a volunteer or a donor, we can’t and we won’t guarantee access to any government officials.” But he adds: “Just as the president and administration officials deliver updates on the legislative process to Americans and organizations across the ideological spectrum, there may be occasions when members of Organizing for Action are included in those updates.?”