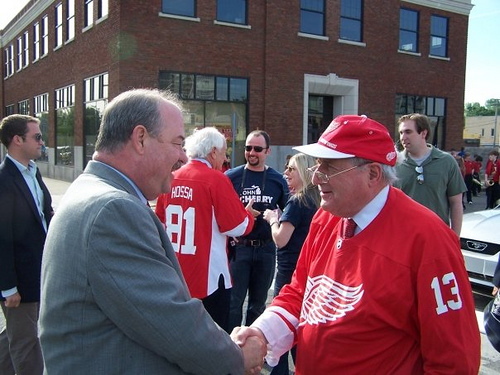 In his Tuesday column, the New York Times‘ Joe Nocera hails Democrat Carl Levin, the tough, irascible senior senator from Michigan who will retire at the end of his sixth term in December 2014. Nocera calls Levin “the Senate’s muckraker,” and he’s right: As the top Democrat on the Permanent Subcommittee on Investigations, Levin has probed shady mortgage dealings, the dark world of derivatives, feckless ratings agencies, and more. He famously said “shitty deal” a dozen times during a hearing with Goldman Sachs executives on, well, Goldman’s shitty mortgage deals.

At the end of his column, Nocera drops in this juicy detail:

Toward the end of my interview with Levin, he let slip a tantalizing tidbit. Sometime in the next few months, the permanent subcommittee plans to call the Internal Revenue Service to task for allowing the political super PACs to be classified as tax-exempt 501(c)(4)s. “Tax-exempt 501(c)(4)s are not supposed to be engaged in politics,” he said. “It is against the law to do so.” Then he added, with a certain undeniable relish, “We’re going to go after them.”

Oh, boy, indeed! Finally, someone in power plans to grill the IRS on why it is allowing hundreds of millions of dollars in secret money to flow through supposedly nonpartisan “social welfare organizations” and into our elections. Levin’s comments aren’t a complete surprise. In his retirement announcement, Levin said his investigative subcommittee will “look into the failure of the IRS to enforce our tax laws and stem the flood of hundreds of millions of secret dollars flowing into our elections, eroding public confidence in our democracy.”

We’re keenly interested in dark money here at Mother Jones, and as Mother Jones‘ own dark money reporter—yep, it’s there in my bio—I can’t wait to see what Levin digs up. Levin and his staff declined multiple interview requests, so you’ll just have to keep an eye on this space as the story develops.