Back in December, not long after the massacre at Sandy Hook school massacre in Newtown, Connecticut, Bloomberg News published a study suggesting that by 2015, guns would kill more Americans than traffic accidents do.

The comparison struck a nerve, and the factoid has become a talking point in gun control debates on Capitol Hill. But it’s clear from the data that the prediction wasn’t just a hypothetical. A number of states have already hit this grisly milestone.

Check out the interactive map below to see where your state stands, according to the most recent data available from the Centers for Disease Control and Prevention.

It’s little surprise that many of these states—including Alaska, Arizona, Colorado, Indiana, Utah, and Virginia—are notorious for lax gun laws. What’s more, the numbers aren’t driven just by “bad guys with guns.” Nationally, close to two-thirds of gun deaths are suicides, and the split is much higher in states such as Alaska, which reported more than twice as many gun suicides as traffic deaths in 2010. Utah (the “most depressed” state, whose suicide problem we cover in detail here), Nevada, Oregon, and Washington are also seeing more gun suicides than traffic fatalities. Idaho, Montana, and others are close behind. We’ll leave you with this chart showing the most recent nationwide numbers available: 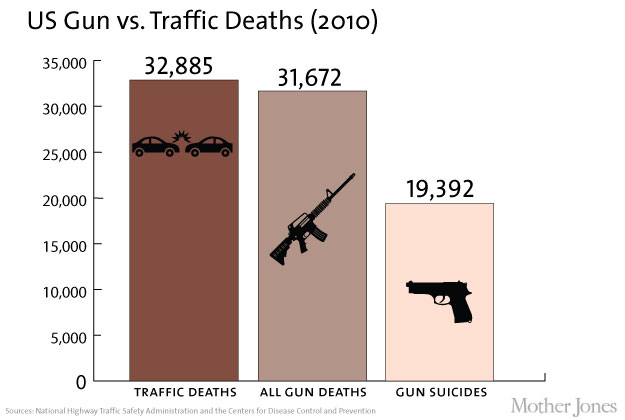