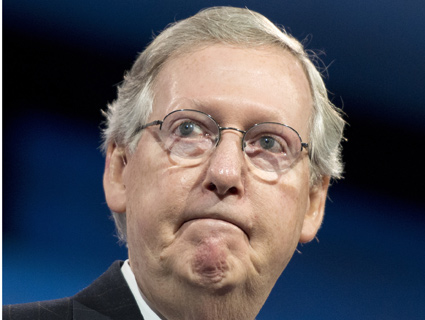 In a blistering editorial on Sunday, the Louisville Courier-Journal, the largest newspaper in Kentucky, weighed in on the controversy kicked up by the Mother Jones article disclosing a tape that captured Republican Sen. Mitch McConnell and his campaign aides at a private strategy session laughing about using actor/activist Ashley Judd’s past struggles with depression and her religious views as political ammunition, should Judd challenge McConnell for his seat. The newspaper derided the super-PAC that reportedly was connected to the tape, but it unloaded on McConnell, who is up for reelection next year:

The contents of the audio are as despicable as they are damaging, leaving Mr. McConnell unable to defend them. Instead, he blustered he was the victim of “Watergate style” bugging by left-leaning enemies and demanded an FBI investigation.

The paper, which McConnell targeted for a “Whac-A-Mole” offensive at that meeting, blasted McConnell for ducking the true issue at hand:

Mr. McConnell has masterfully diverted public attention from the offensive content of the tape—which is the real story here—to his outrage over how it was obtained. McConnell campaign manager Jesse Benton called the tactics “comparable only to Richard Nixon’s efforts to bug Democratic Party Headquarters.”

But how it was obtained—reportedly by at least one member of Progress Kentucky recording it outside the closed door of the McConnell campaign meeting—falls short of the “Watergate style” bugging Mr. McConnell and staff conjured up.

The tape, the newspaper contended, was just another reason why Kentucky needs to replace the five-term senator:

He has long ceased to serve the state, instead serving the corporate interests he counts on for contributions and leading obstruction that continues to plague Congress. He needs a credible opponent and a serious effort by people ready to advance the interests of Kentucky and its citizens.

With his I’m-the-victim act, McConnell may have nudged the narrative in his favor, but he did not win over the Courier-Journal.