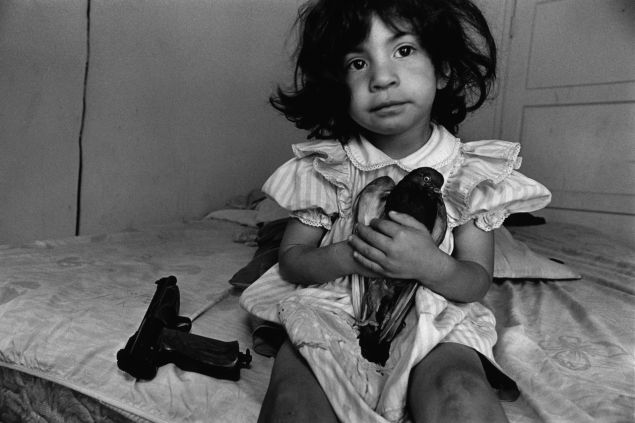 For more than a decade, American street gangs have been spreading to Central America and the Caribbean—a trend that has been greatly accelerated by the politics of the US Immigration and Naturalization Service. Since 1992, the INS has rounded up and deported thousands of criminal immigrants—legal and illegal alike—many to homelands they barely know.

At first glance, the policy makes perfect sense. The most visible group being deported is young gang members. Many of them here illegal, and they have broken American laws: Send them home. And so we do—to Mexico, Belize, El Salvador, Colombia, and Caribbean nations like Haiti.

But photographer Donna De Cesare has looked deeper and discovered that sweeping the gang problem across our borders is not a tidy solution. When they arrive in their narrative countries, the deportees—not a few of whom, says one expert, are “educated in the worst aspects of criminal culture in the United States”—bring a new underworld element to countries already plagued with violence and social instability. And the deportations frequently boomerang, as rootless teenagers who have been shipped to Central America or the Caribbean illegally reenter the United States.

“No matter how many gang members you deport, things are not going to change as long as society is not addressing the needs of youth,” says Magdaleno Rose-Avila, cofounder of Homies Unidos, a group that works with gang members in El Salvador and the United States.

The transfer of gang culture to El Salvador is emblematic of a problem that affects countries throughout Central America and the Caribbean. El Salvador’s 12-year civil war alone drove more than a million refugees from the country; many of them made their way illegally to Southern California. But in the 1980s, Congress pressed the INS to improve its record of deporting illegal aliens. In the riots that followed the Rodney King verdict in 1992, the Los Angeles Times reported, thousands of Latinos were detained, and the INS deported almost 800 of them. The INS also launched its Violent Gang Task Force, and that fall a wave of anti-immigrant sentiment swept through electoral politics.

In 1996 new laws took effect that aimed to increase the deportation of illegal aliens and legal immigrants who committed crimes.

Deported gang members arrive in their native countries as outcasts. Many have not been in their homelands since infancy, have few relatives to turn to, and have become acculturated to American life. With their visible tattoos, mixed English-Spanish patter, homeboy appearance, and American swagger, gang members are routinely stigmatized by police authorities, potential employers, and society in general. Most find it difficult to get a job. Some are killed by right-wing vigilante groups. 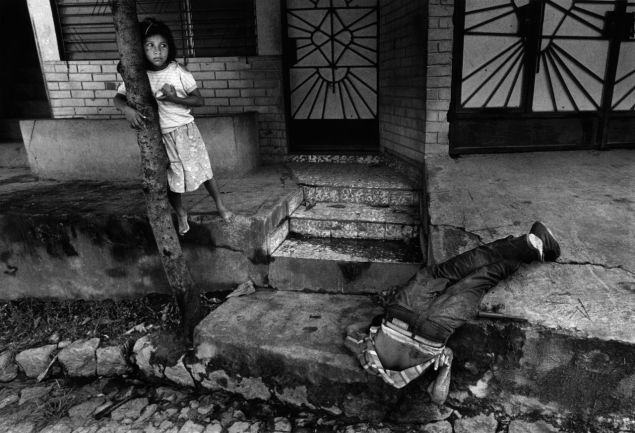 In 1989, a child stands by a man reported killed by Salvadoran death squads. Today, the revived death squads target gang members, not political dissidents, and the homicide rate is higher than ever.

“They’re not really wanted anywhere,” says Carolyn Rose-Avila, Save the Children’s regional director for Latin America and the Caribbean. “They’re really in limbo. If they had any options at all in the States, they have even fewer options in El Salvador, where they’re treated like garbage, like toxic waste.”

The flood of criminal deportees—more than 56,000 last year—creates dire problems for recipient countries, some of which are just beginning to recover from years of political violence. But not all signs are grim. With the help of groups like Homies Unidos, Haiti’s Chans Alenativ, and the Conscious Youth Development Programmed in Belize, some gang members have gone straight and are putting their energy into reforming other members.

Candance Bannerman, director of Save the Children in El Salvador, has seen several Homies Unidos members evolve form street toughs into apostles of nonviolence who could steer other young Salvadorans away from gang life. “Some of these rival gang members could barely stand to be in the same room when we started,” she says. “They wouldn’t even make eye contact with each other because it was almost a threat. Two year later these same guys have become some of our best communicators.”

Those who work with gang members maintain that deportation is not a cure. They say that the United States must help devise hemisphere-wide approaches to the issue. And any solution must start with the promise—so vividly depicted in De Cesare’s photographs—that gang members are not monster but young people entangled in poverty and violence. “Most find themselves in circumstances not of their mating,” says Joan Serra Hoffman, who directs a Latin American program on violence prevent for the Massachusetts-based Education Development Center. “They are human and redeemable. It’s never too late.”