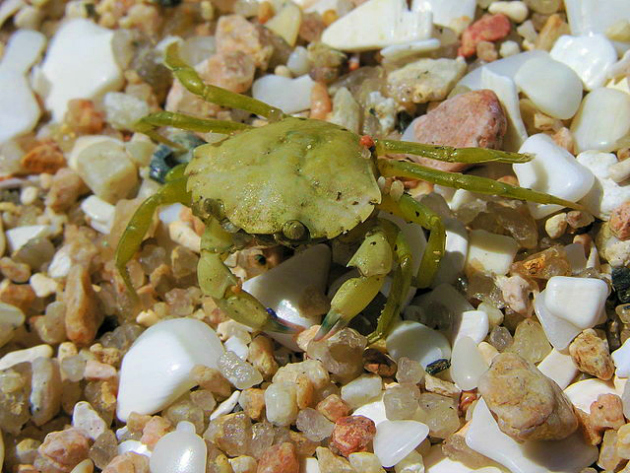 
The European green crab—an invasive species in North America and one of the “worst 100” invaders on the Global Invasive Species Database—may not be the utter evil we once thought. A couple of new papers (here and here) from a team at Brown University detail how they’re actually helping the dwindling salt marshes of Cape Cod recover. It’s a fascinating detective story—from the frontlines of an emerging field known as historical ecology—and it’s rife with plot twists and red herrings, which begins like this: 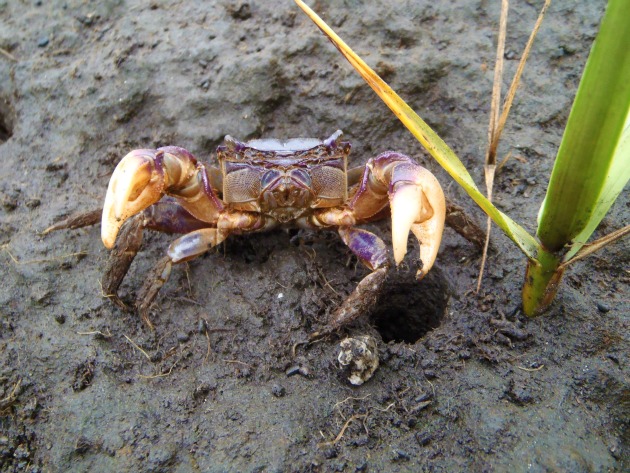 Enter a mysterious die-off of Cape Cod low marsh cordgrasses that began decades ago. Researchers eventually traced the culprit to the native purple marsh crab, photo above, which was eating through the cordgrasses at alarming speed.

But why had this good crab suddenly gone bad? The researchers kept researching. Turns out that predators of those crabs—blue crabs and striped bass—were being overfished by recreational fishers. In the course of 337,000 fishing trips to Cape Cod annually, these fishers had triggered a trophic cascade.

That’s when the removal of predators messes up the ecosystem two or more trophic links removed. In other words, a system-wide meltdown of a  functioning ecosystem. And one unlikely to recover its former state.

Turns out the mosquito ditches, which had seemed more or less harmless since their installation decades earlier, were accomplices in this trophic cascade. That’s because the ditches had facilitated corridors of low marsh cordgrasses. As striped bass and blue crabs were being overfished, purple crabs were experiencing a fourfold increase in population. Suddenly these corridors of low marsh cordgrasses became superhighways for hungry purple crabs to eat themselves into a novel state of hyperabundance. 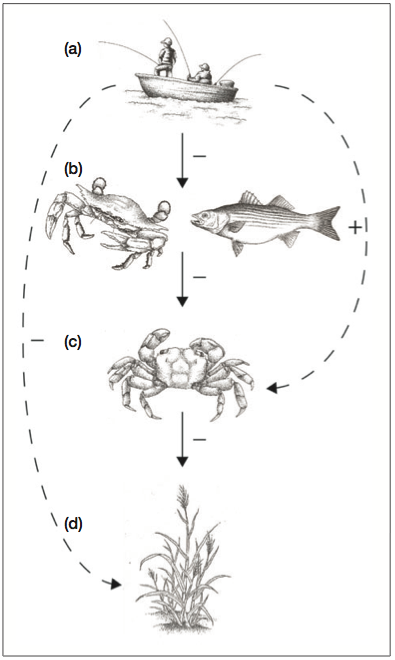 At developed sites with increased accessibility and fishing pressure (a), the purple marsh crab, [c]) is released from predatory control (eg blue crab and striped bass, [b]) and consumes cordgrass , [d]) along creek and ditch banks: TC Coverdale, et al. Frontiers in Ecology and Evolution. DOI:10.1890/120130

But wait. The story’s not over. Enter the introduction of an invasive species, the European green crab with a reputation for biological badassness. According to the findings of the researchers, just published in Ecology, these unwanted invaders (they probably got to Cape Cod as stowaways on ships) discovered the banquets of incredibly yummy (okay, I surmised that part) purple crabs that almost no one else was eating. Nature being what it is, the badass crab struck hard.

Hard enough to begin to reverse the decades’-long decline of Cape Cod’s salt marshes. Which, BTW, keep the Cape from eroding off into the Atlantic Ocean. The authors write:

Our results show that, despite previous evidence of negative impacts on native species throughout its introduced range, [the European green crab] is well suited to accelerate the recovery of heavily degraded salt marsh ecosystems in New England.

The effect of the invasive crab doesn’t even have to involve actually eating all that many native purple crabs, lead author Mark Bertness tells me. “Fear of being eaten can be a stronger ecosystem effect than being eaten, because predation happens one event at a time whereas a single predator can scare away dozens of prey yielding much larger ecological effects.” Though he adds this caution: “Marsh recovery driven by fear of green crabs is superficial and doesn’t replace the centuries of accretion and carbon sequestration taken to build Cape Cod marshes.”